Fruitport High School’s F.I.R.S.T Robotics team, the Techno Trojans, work on their robot for the 2020 season. As the team wraps up the design, they’re working to put the robot together.

Fruitport High School junior Emily Fairfield said she’s learned a lot from her teammates and mentors during her three years on the Techno Trojans.

FRUITPORT — The Techno Trojans are gearing up for the new season.

Fruitport’s F.I.R.S.T. Robotics team has spent the past few weeks designing the robot for this season’s game. With the majority of the design work complete, the team is beginning to work on the robot’s layout and pneumatics, said Joe Hebert, the team’s head coach.

This season’s F.I.R.S.T. (For Inspiration and Recognition of Science and Technology) Robotics game, Infinite Recharge, calls for teams to race and collect the most “power cells.” Robots will shoot “fuel” into “power ports” to energize the shield generator, Hebert said.

To be successful, robots need to be able to read color and turn a wheel three times to advance to the next stage of the competition. Robots also need to climb and hang onto a bar.

After learning about this season’s game, the Techno Trojans started brainstorming ideas for their robot. The team is focusing its efforts on shooting the “power cells,” which are yellow balls.

In addition to working on the robot, students are developing a new app to track other robots’ components and capabilities. The technology will help the Trojans choose what teams to join their alliance, Hebert said.

Fruitport High School senior Nick Piper has been working on how to transfer the ball into the shooter component. Since the team wanted to focus on shooting, Piper said he wanted to be involved with that aspect because he knew it would be a vital part of the robot.

Piper, a four-year member of the Techno Trojans, said he fell in love with electrical engineering because of his involvement on the team.

Since the balls can have an erratic flight path, Hebert said they’ve spent time looking at the compression rate needed on the wheels to transfer the ball to the shooter component and the speeds needed to shoot the balls effectively and accurately.

Fruitport junior Emily Fairfield said they’re in the process of determining how to best achieve the necessary angles to effectively shoot the balls. In addition to having a moving component on the top of the robot, it will also be equipped with a camera that will allow the team to see the target.

Fairfield, a third-year member of the team, said she has learned a lot from her peers and mentors, and she hopes to use what she’s learned in her future.

Once the team finishes the design, pieces of the robot will be machined out, a service donated by the mentors’ businesses. If students are unable to do the work themselves, mentors can help with laser cutting and millwork.

Hebert said the partnership shows students the idea of taking their design to seeing it come to production.

In previous years, teams had a stop date by which they needed to have their robot finished. This year, there is no hard deadline, and they can work on their robot after competitions.

Despite the change, Hebert said they plan to have the robot built within the first six weeks, and use the remaining two weeks to focus on driving and programming.

While the change gives the Trojans a chance to be more prepared for competition, Hebert said it also gives their competitors more time to also be even more prepared, raising the bar for all teams.

The Techno Trojans, comprised of 24 students and 18 adult mentors, will first compete March 6-8 in Toronto, Canada. It’s a competition the team also participated in last year, which Hebert called a “great experience.” The Canadian competition gives the team an opportunity to gain experience outside of their district, work through nerves, and work through challenges they encounter in their first competition of the season, Hebert said. 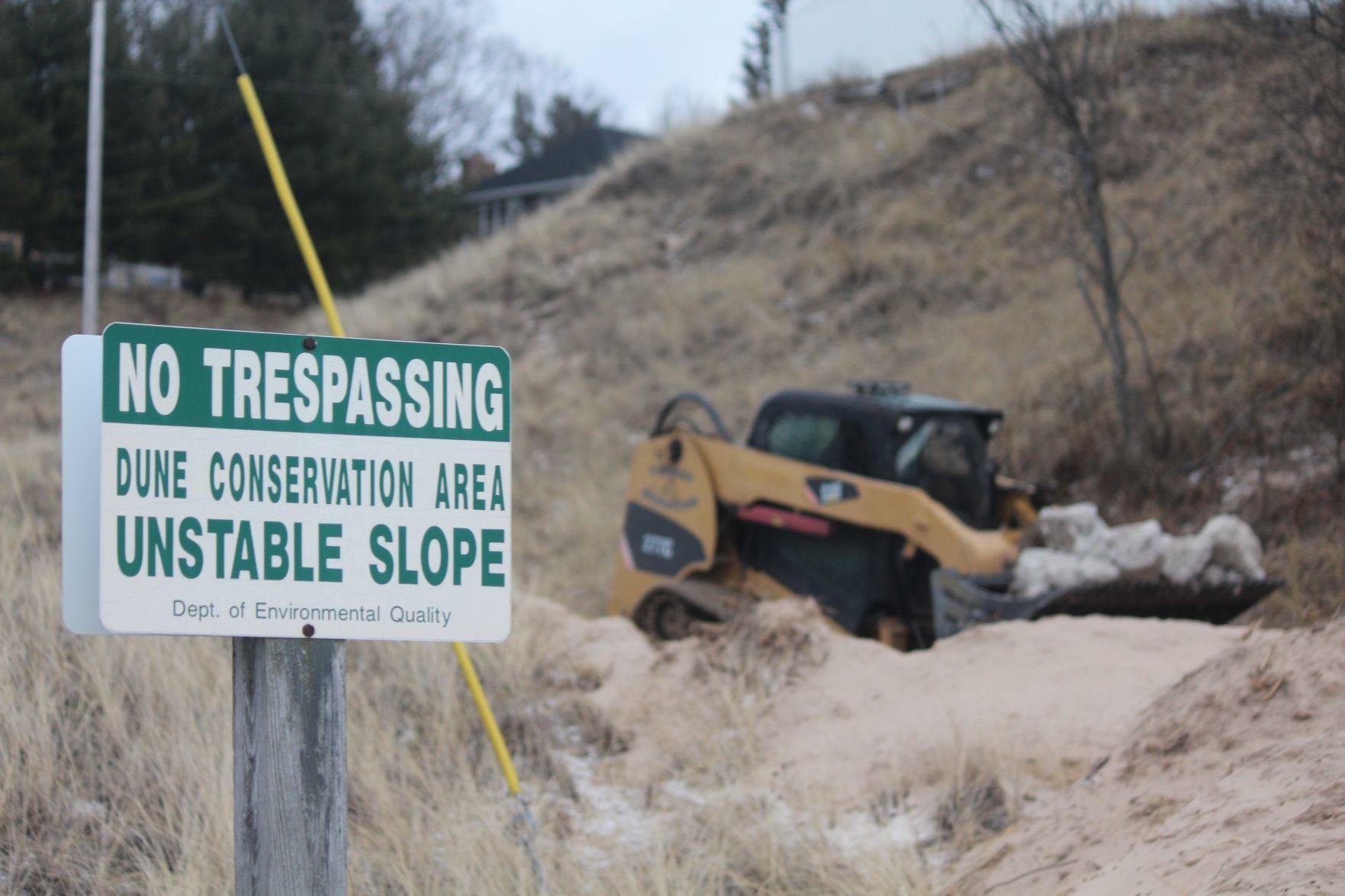 Work continues on an erosion control project along Lake Michigan earlier last fall. This is not the property in the story.

Two Grand Haven Township property owners will be able to go ahead with a Lake Michigan erosion control project after an Ottawa County judge ruled in their favor.

An opinion released Wednesday by Circuit Judge Jon Hulsing said that a proposed revetment on the bluff in front of the cottages “does not constitute an unreasonable interference or burden on the use of the beach easements.”

Next-door neighbors Susan Wittenbach and Jeffrey DeLongchamp, whose addresses are 10583 and 10577 Lakeshore Ave., applied for permits from the Michigan Department of Environment, Great Lakes and Energy (EGLE) to build a rock revetment in front of their properties. The permits were approved, but other neighbors who also have easements to use the beach filed a lawsuit late last year requesting a stop work order. DeLongchamp and Wittenbach filed a counter lawsuit.

Property owners in the Dunes Association, which is across Lakeshore Drive, claimed in the lawsuit that the revetment would stretch across the beach, thus limiting their ability to use the beach.

Wittenbach and DeLongchamp argued that, in addition to protecting their cottages, the revetment is necessary to act as a foundation for the reconstruction of decks and a stairway necessary to gain access to the beach.

Hulsing said that, based on easement rights granted to the property owners on Poplar Drive and in the Dunes Association, Wittenbach and DeLongchamp have the legal right to maintain access to the beach and to use the roads in the area to get the equipment and rocks needed to that location.

The neighbors became concerned about the rising waters of Lake Michigan in late 2018 and early 2019 and started the process to curb the erosion by consulting local experts. Because they did not own the beachfront, they requested in writing for permission to use the easement for the revetment work, and received that from property owner Linda Duke in April 2019.

During a trial last week, Duke said she later came to realize the scope of the work, and that the revetment would slope across the beach. In September 2019, she revoked her consent.

Despite opposition from the Dunes Association and Duke’s action, EGLE and the U.S. Army Corps of Engineers approved permits in November 2019.

In January, a motion for a temporary injunction was filed. That’s when the court ordered the two lawsuits to be combined into one case and scheduled the trial that started Feb. 4.

Hulsing’s opinion noted: “The primary difference between the use of the beach easement by members of the Dunes (Association) and that of defendants (Wittenbach and DeLongchamp) is that defendants were and are permitted to install, repair and maintain stairs, viewing areas and benches within the beach easement to the extent that those structures existed in 1999. Defendants may, unlike the Dunes, use the fore dune to access the beach from their properties.”

Hulsing said that nobody could doubt the primary reason for the proposed revetment is to “prevent the forced removal of the cottages due to erosion,” and the easement does not grant them the right to protect their property. The defendants recognized this and argued that their proposal does not steal Duke’s property, but allows them to use their easement.

Hulsing said that probably the most hotly contested issue in the case is whether or not the revetment will “unreasonably” interfere with the Duke property or the association members’ easement. The judge said that, due to erosion, it was difficult for all but the most fit and agile person to gain access to the beach. Also, because it is winter, the use of the beach is much decreased. And eventually, when the water level goes back down, the sand will cover the rocks until the next high water cycle arrives.

Any temporary blockage of the beach by the revetment is not unreasonable, the judge said.

“Rather, it is only another temporary inconvenience and part of the construction of a reasonable revetment,” Hulsing said.

Hulsing noted that erosion controls built in the area in the 1970s were buried for nearly 30 years and just resurfaced last year.

“The devices now lay primarily in the water,” he said.

“(The contractor) recommends that these be removed, for good reason. These objects can best be described as decayed, dangerous and no longer effective, yet, plaintiffs make no complaint about them.”

At trial, the plaintiffs reserved their right to amend their complaint to ask for damages if the defendants prevail. They have 21 days to do that. Otherwise, the judge’s order becomes final.

The previously proposed 200-foot setback requirement is shown in this graphic. Under this rule, new construction along Lake Michigan in Grand Haven Township would need to be set 200 feet back from the high water mark (solid white line). This section was removed from the township's proposed new Zoning Ordinance.

For more than two years, the Grand Haven Township Board and township staff have been working on a new Zoning Ordinance and zoning map.

According to Stacey Fedewa, the township’s community development manager, the ordinance and map updates are being made to support the township’s Master Plan.

During Monday’s Township Board meeting, Fedewa discussed some of the changes that have been made to the proposed ordinance since it was tabled by the board in December 2019.

“The last time that we got together, there were about seven items ultimately that were requested to be addressed,” she said.

One of those items was to remove the short-term rental regulations from the Zoning Ordinance, for the time being.

“When we first started doing the short-term rental ordinance, I didn’t think it would be this controversial,” Township Manager Bill Cargo said. “We were working on adopting the Zoning Ordinance, and I thought, ‘Why don’t we do these together?’ My recommendation is now to reverse that.”

The Township Board has heard from many residents and others sharing their desire for short-term rentals in the area, some asking for more strict guidelines for rental owners to follow and those who would like the rentals to be banned.

Cargo said it would still be a few months before an ordinance for short-term rentals is ready, and he didn’t want to delay completion of the new Zoning Ordinance.

Other items addressed on the proposed Zoning Ordinance include reviewing the planned unit development (PUD) limit of two to four units, requiring parking lots to have concrete edges and low rolled curbs, amending the definition for “hospital,” amending the definition of “building height” and replacing it with the building code definition, removing the section prohibiting seawalls, and removing the section requiring a 200-foot setback for properties along Lake Michigan.

“The setbacks and seawalls, I think we were all pretty clear on that,” Fedewa said Monday night. “We are not going to regulate those and we are going to have the state of Michigan to take care of those topics.”

The Township Board approved postponing proceeding with the ordinance until March, which will give the township’s Planning Commission a chance to review the changes.