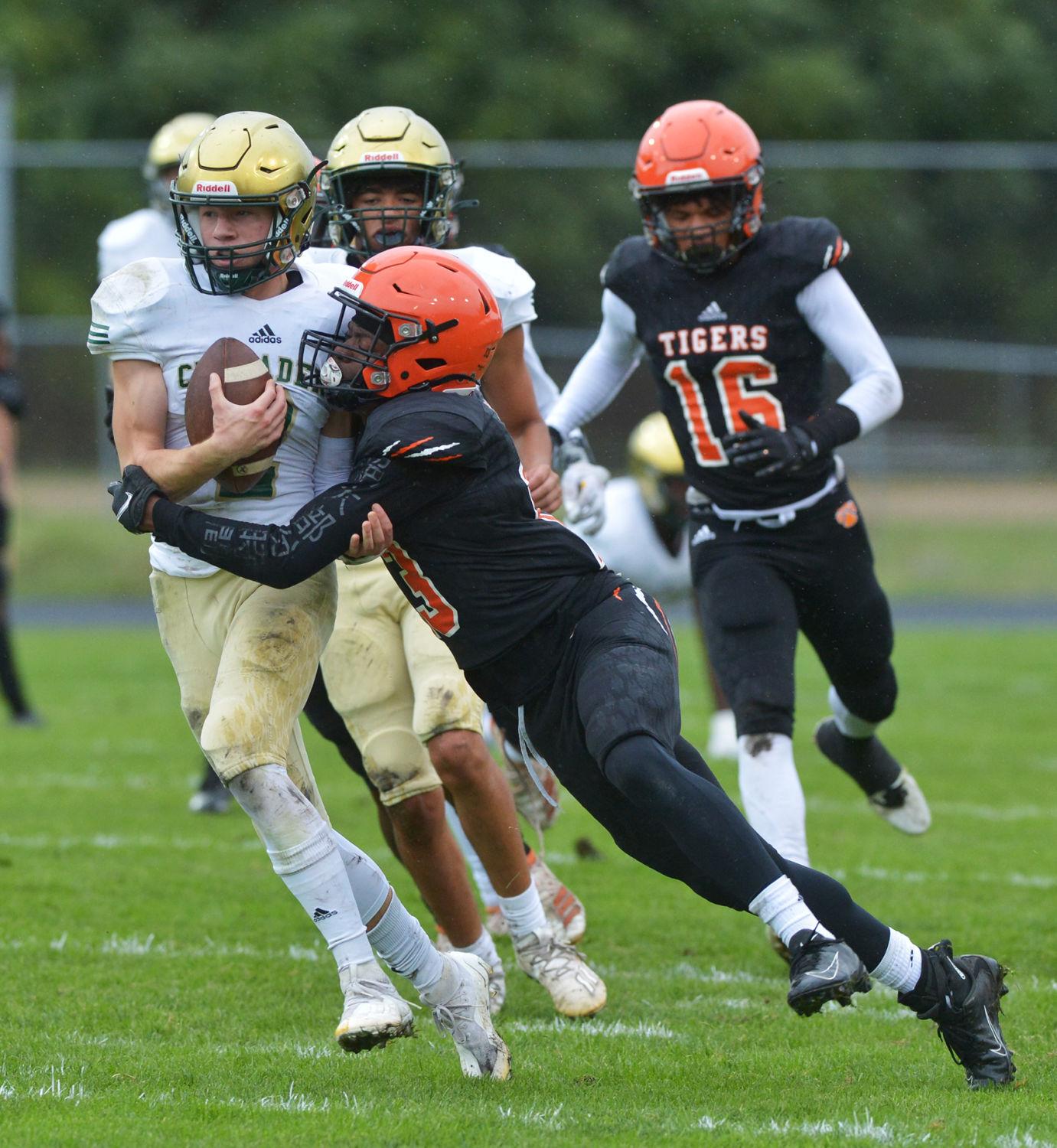 TOP Left: One of the jewels of Jeff Coffey’s collection is a 1953 Topps Jackie Robinson card. BOTTOM LEFT: A baseball signed by many members of the 1952 Detroit Tigers team. ABOVE RIGHT: Jeff Coffey kneels in front of a collection of his baseball cards, which are on display at the Tri-Cities Historical Museum.

Left: One of the jewels of Jeff Coffey’s collection is a 1953 Topps Jackie Robinson card. Right: A baseball signed by many members of the 1952 Detroit Tigers team.

Coffey likes to match a card with each of the autographed baseballs he owns.

LEFT: A Sporting News record book from 1934, and to the left, a Matty McIntyre card from the 1909 t206 set. RIGHT: Jeff Coffey places a signed mini-bat into the Community Case at the Tri-Cities Historical Museum. Below: A rare Babe Ruth Home Run King game from the 1920s.

A baseball signed by many members of the 1952 Detroit Tigers team.

Jeff Coffey has been collecting baseball cards since he was a kid in the 1980s.

Over the years, one thing has remained the same – those cards, whether the pride of his collection or a common card, were all packed away in boxes where no one could see them.

That all changed recently when Coffey was chosen to display his collection in the Community Case at the Tri-Cities Historical Museum.

Coffey’s baseball cards, many dating back to the ’50s, as well as a wide range of baseball memorabilia, will be on display at the Grand Haven museum through Oct. 11.

“A lot of this stuff came from when I was a kid, and like everyone else, I had it sitting in a box for years,” said Coffey, a real estate agent who lives in West Olive. “A few years ago, I started putting things out. I’ve had it displayed in my basement for a few years, mainly for my benefit. My kids couldn’t care less about them. So to have people walk by and see them – I’m sure some people think it’s a bunch of junk, but other people think it’s the coolest thing in the world. Me, I think it’s the coolest thing in the world.”

Coffey’s collection dates back to one of the most iconic sets of all time – the 1909 t206 set. One card in that set, Honus Wagner, is perhaps the most valuable baseball card of all time (cards at that time were distributed by tobacco companies; since Wagner disdained tobacco use, he demanded they halt the printing of his card, making it exceedingly rare).

He also has a 1932 Sanella Babe Ruth card on display, as well as an old game from 1928 called the Babe Ruth Home Run King.

“They didn’t get his licensing rights to use his name, so they had to take his name off the game,” Coffey said.

The display features autographed balls and an accompanying card from such greats as Hank Aaron, Stan Musial and George “Sparky” Anderson; a 1953 Topps Jackie Robinson card; a ball signed by the 1952 Detroit Tigers team, and another signed by several members of the 1984 Tigers; an autographed card featuring Norm Cash and Al Kaline; a 1934 Sporting News baseball record book; and much more.

Coffey focuses his collection on all-time greats and Hall of Fame players.

Clearly, not all of these cards were collected when Coffey was a kid.

“We run a couple antique booths, my wife and I, so as a hobby, we go to garage sales over the weekend,” he said. “She collects Golden Books and I collect sports memorabilia. It’s rare that I find anything sports related, but you never know.”

Coffey has an Alan Trammel autograph that he found in a book at a garage sale. But he rarely picks up cards on eBay – that takes the fun out of the hobby, he said.

“Sometimes I’ll go to auctions and card shows,” he said. “To me, it’s the thrill of the chase.”

Growing up in the Ann Arbor area, his father had tickets to the Tigers, Pistons and Red Wings games.

“I didn’t get to go to many games, because he gave most of them away, but when I did go, I would run down and try to get autographs,” Coffey said. “I remember the strike-shortened 1981 season, the Cincinnati Reds were leading the division when they stopped playing. When the season was going to start, Riverside Stadium was rented out, so they moved their entire team to the University of Michigan. I would take the bus there every day, and I started accumulating the Big Red Machine – George Foster, Tom Seaver, Johnny Bench.”

A week ago, while tending to his collection at the museum, a man walked by and noted that he had an old baseball signed by several Detroit Tigers players. He and Coffey struck up a conversation for several minutes, and the smile never left Coffey’s face. That’s exactly why he was so excited to put his collection on display.

“There are so many stories to tell,” he said.

It was more than a week ago that President Joe Biden came out with his nationwide vaccination mandate. And, according to Biden’s speech, businesses with more than 100 employees will now have to require workers to get the COVID-19 vaccine or receive weekly testing for the virus.

If a business refuses to comply, it would then be forced to pay a fine.

Despite the cut-and-dry nature of the speech, it is still unclear how exactly it will be implemented.

JSJ Corp. President Nelson Jacobson said there still isn’t any sort of timeline for when the ruling is supposed to take effect and how its implementation might differ from state to state.

Once more of the details for the mandate are worked out, it will likely have to go to the Occupational Safety and Health Administration (OSHA). Once OSHA has an opportunity to look at it, then it would go to the Michigan safety administration before the mandate could be passed on to local businesses. A timeline for when any of that occurs remains a mystery.

Jacobson said it is unlikely all of their employees will be required to be vaccinated as long as an alternative such as weekly testing exists. However, whatever is decided for one facility will likely be the same at all JSJ facilities, regardless of size, he said.

In terms of that testing, Jacobson said he doesn’t think the financial burden would fall on the employees. It is more likely that JSJ would cover that cost.

Until more is known, Jacobson said JSJ will continue to take precautions, include regular temperature checks, having employees sign into work each day and practicing social distancing.

Shape Corp.’s Tony Verplank said he is vaccinated, but also said the company isn’t likely to require vaccinations. He said a major fear is that employees might seek work with smaller companies or businesses that aren’t covered under the umbrella of Biden’s mandate.

Verplank said Shape is already facing challenges filling open positions. If weekly testing is required, that would add a significant expensive for the company, he said. Verplank estimates it would cost $400 a year to test a single employee.

Shape Corp. has fixed contracts with its customers, so it’s not as simple as raising prices to cover testing costs. But he did say that if COVID-19 continues to be an issue, the cost may be something they will be forced to negotiate in future contracts.

Joy Gaasch, president of the Chamber of Commerce Grand Haven-Spring Lake-Ferrysburg, having spoken to a variety of businesses both big and small, said there is a lot of uncertainty in the community regarding the mandate. Most businesses are taking a wait-and-see approach, she said. Some businesses have already started to require their employees to be vaccinated, while others leave it up to them to decide, she said.

Many are wondering about how businesses and organizations that have received federal funding will be affected by the mandate, Gaasch said. Will they be forced to abide by the mandate if they don’t have at least 100 employees?

Click and hold your mouse button on the page to select the area you wish to save or print. You can click and drag the clipping box to move it or click and drag in the bottom right corner to resize it. When you're happy with your selection, click the checkmark icon next to the clipping area to continue.