If you need to purchase a subscription.
You have permission to edit this page.
Edit

Tri-Cities Area Habitat for Humanity hopes to rent campsites during what would have been this summer’s Coast Guard Festival week, July 27 to Aug. 2, despite the festival being canceled.

The downtown campground typically raises $30,000 a year for the local chapter of Habitat for Humanity.

It also means thousands in lost revenue for the local Habitat for Humanity chapter.

Festival or not, the Tri-Cities Area Habitat for Humanity hopes to continue a camping tradition that brings funds to its home-building program.

Vicki Coulson, the agency’s development manager, said her group has been renting RV space during Coast Guard Festival week for more than a decade. Typically, the weekly rental fees bring about $30,000 to Habitat, the approximate amount it takes to build one home. The organization usually builds one or two homes every year.

Stanco Metal owner Gerry Slagel donates the parking lot across from the Grand Haven Farmers Market and the grassy space near the “funky farm” mural building, which runs from First and Elliot streets to Columbus Avenue for the weeklong camping fundraiser.

“He very graciously lets us use it,” Coulson said. “It’s huge to us. We have to do a lot to make $30,000. It’s the way we build homes. We have to have the money up-front to build the Habitat homes. When people are in a Habitat home and have a mortgage, the money just trickles in, then we start the process all over again.

“Renting RV space is a huge fundraiser for us,” she added. “The same people pretty much come every year.”

There’s always a large wait list if anyone cancels, according to Coulson.

“It’s a prime location and close to everything,” she said.

Despite the cancellation of this year’s festival, Coulson said she contacted Slagel and asked to still use the property during what would have been festival week. She and her staff also contacted the approximately 60 regular campers to gauge their interest.

“Most of them do not want to come if there’s not a Coast Guard Festival,” Coulson said. “The majority of them are local. Some come from Grand Rapids and north of there, but overwhelmingly the majority are from the Grand Haven, Muskegon and Spring Lake area.”

“I’m trying to get the word out near and far for people to come,” she said. “From that location, you can walk to the Farmers Market, the splash pad, to the downtown restaurants and shops, and you can swim at the beach. There’s a ton of things that can be done without Coast Guard Festival. What better way to have a vacation? You’re still in your own backyard.”

All RVs must be self-contained, although there are portable restrooms and a dumpster on-site. The weekly fee, starting at $225, includes a parking permit for an extra vehicle. Campfires are not allowed. Generator use is permitted during reasonable hours.

Should not enough people reserve sites, Coulson said they’ll have to cancel the plans, which would be devastating to the organization.

“We had already made plans for using the money this year,” she said. “We were in the process of interviewing final families that would be under consideration when all this (pandemic) came about. It’s impacted us in many ways.”

Coulson said it’s also impacted the families they are trying to serve.

“Obviously, many of the people we help were struggling to start with,” she said. “Many have lost their jobs and are trying to collect unemployment. A lot of the people we’re dealing with weren’t that well off to begin with.” 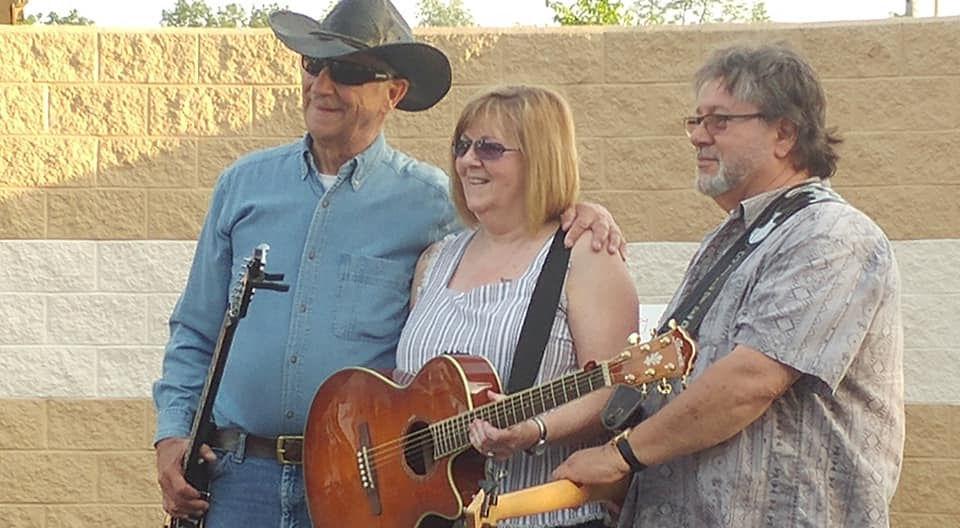 Silverado will perform at the first Dancing into the Sunset event set for Thursday, July 2, at Pomona Park in Fruitport.

FRUITPORT — A month after it was originally scheduled to begin, Dancing into the Sunset was given the go-ahead by the Village of Fruitport to start the outdoor activity on Thursday, July 2.

The Silverado Band will perform dance tunes from the Pomona Park bandshell starting at 7 p.m. and ending at around 9:30 p.m.

A military tribute will be held that evening, and military attire is encouraged. People are also welcome to bring a photo of someone who is in or who served in the military to place on the bandshell wall. 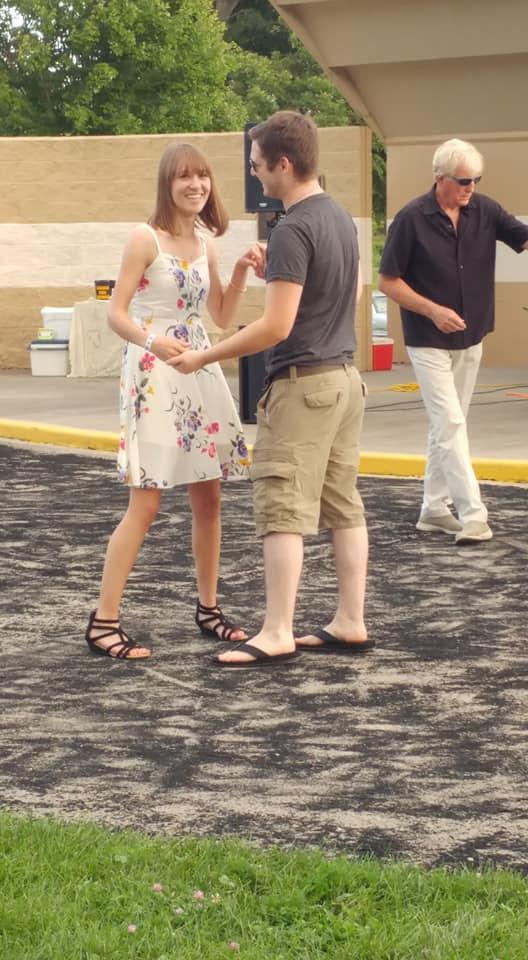 A couple dances on the rubberized surface at the Pomona Park bandshell.

“With just receiving approval to start on the second of July, I am hustling around like crazy to now contact all involved,” said Susie Halter, organizer of the event. “I’m obtaining more sponsors and working on getting the word out that we all can have a few hours to reflect on friendship, dance and music in a safe-as-possible outdoor environment that many are looking forward to.”

“The safety of all that would attend is of upmost importance,” she added. 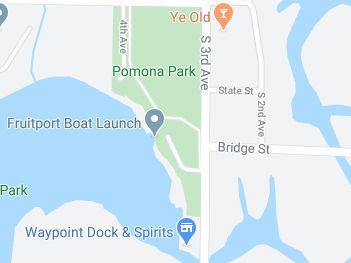 Halter encourages people to wear masks and practice proper social distancing at the event. Attendees are encouraged to bring lawn chairs and set up in a socially distant manner on the wide expanse of park around the bandshell.

Parkside Café will have a tent set up across the street from Pomona Park and will serve hot pizza. Or you may call the café at 231-737-3888 to order food that you can pick up on your way or have delivered to the tent.

Halter started Dancing into the Sunset in 2017 as a way to bring back dancing to Fruitport and to get area residents a chance to gather, enjoy music and dance until the sun sets below the trees along the shores of Spring Lake.

From about 1902 until it burned down in 1963, people came from all across the state to dance to famous big bands in the old Fruitport Pavilion on the north shore of Spring Lake.

Bands scheduled for the rest of the season include: 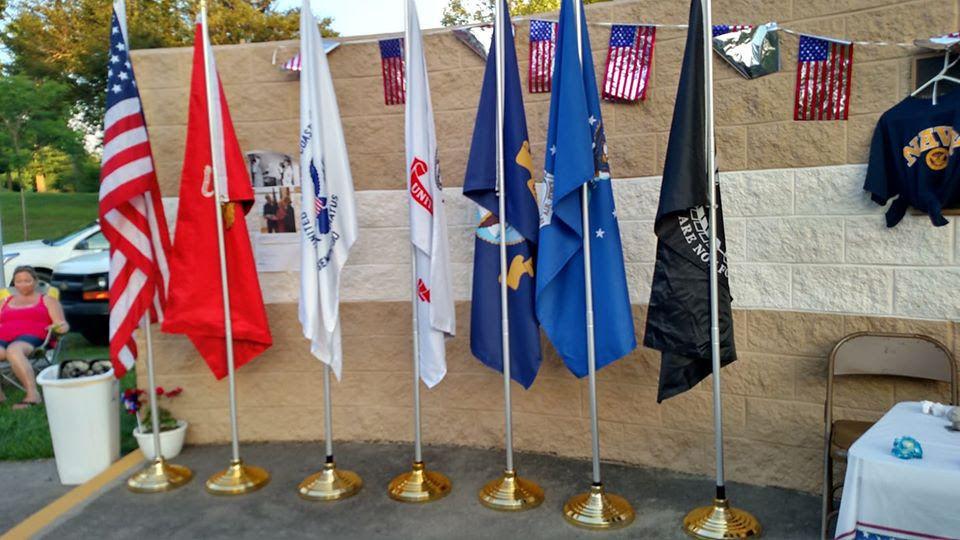 Members of the military will be honored at the first Dancing into the Sunset event on July 2.

Halter said that people should check the “Dancing into the Sunset Dance Party Fruitport” and Village of Fruitport Facebook pages for any changes or updates, based on the COVID-19 pandemic. 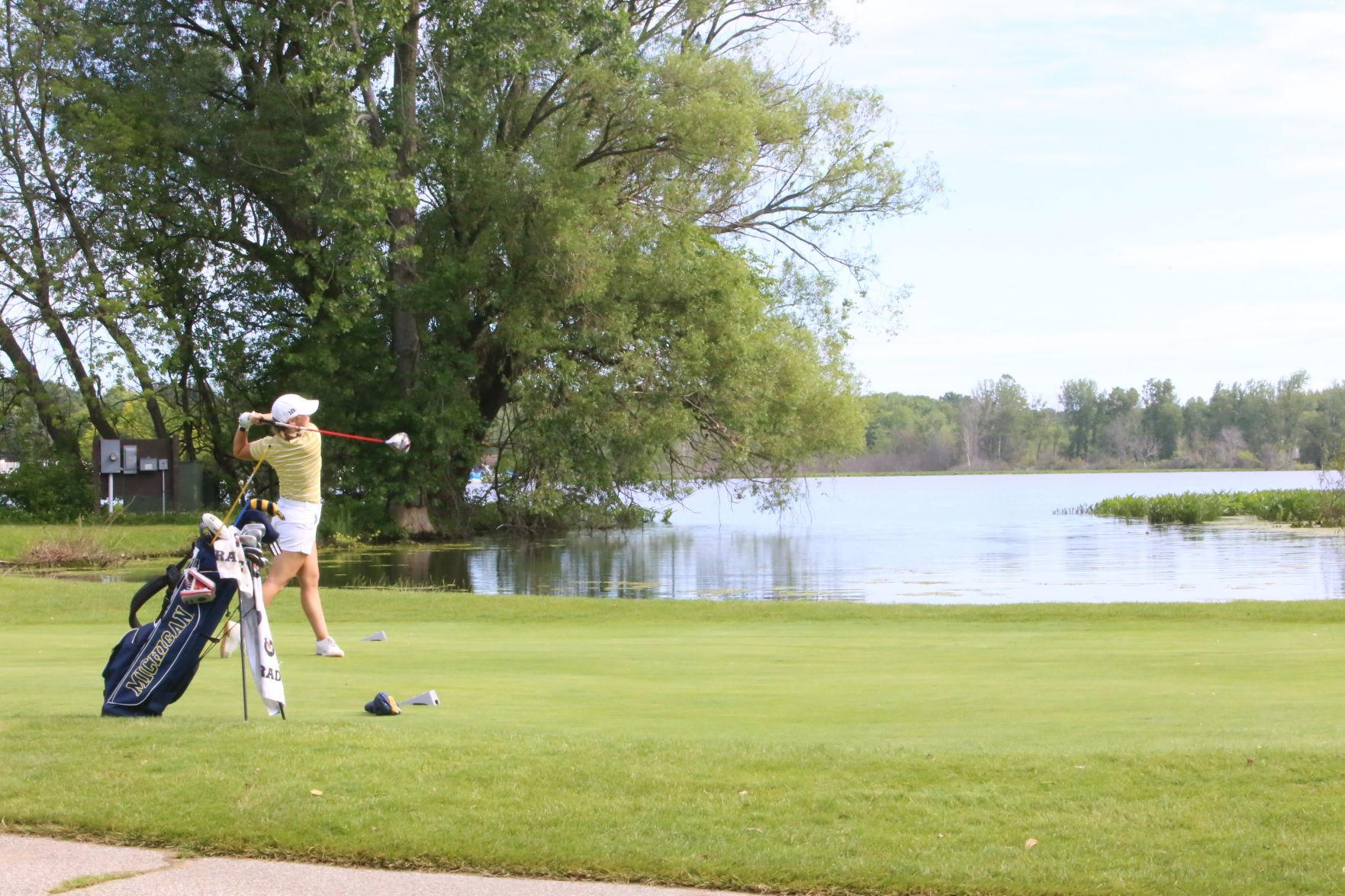 University of Michigan golfer Sophia Trombetta tees off on the back nine of Wednesday’s semifinal in the Spring Lake Invitational.

A recent picture shows flooding at Harbor Island, the site of remediation work planned by the BLP. The utility board on Thursday took the next steps in work to be done there.

Trustees of Grand Haven’s municipal power supplier, the Board of Light & Power (BLP), recently discussed and took action on the next steps of work planned at the J.B. Sims plant site on Grand Haven’s Harbor Island.

“These documents are exactly what we said you would see,” he told the board.

The current bond resolution in place is approximately 30 years old, Walters noted, and when the BLP goes out for a new bond, it will need to take out supplemental bonds.

“This has nothing to do with financing future work, just updating the current resolution,” he said. “This is not approving long-term projects, just short-term loans for what was already approved.”

The resolution, which was approved by the utility board on Thursday, will be sent to the Grand Haven City Council for approval, as well.

Short-term loans, Walters said previously, could cover projects already approved, such as remediation work on Harbor Island and the demolition of the Sims plant, which was shut down earlier this year.

“If a customer bill is 45 days past due, they are eligible for disconnect,” said Renee Molyneux, the utility’s administrative services manager. “Service is reconnected after all past-due amounts – plus any associated reconnect charges, penalties and fees – have been paid in full.”

Molyneux said customers occasionally do not pay their bills and then leave the system without paying the past-due amount.

“We apply the deposit to the final bill,” she said, noting deposits are set at residential rental properties. “If there is deposit money left, we refund it to the customer.”

The deposit for others, she said, may not be enough to cover the final bill should a customer leave without paying.

Discussions on this topic continued from the previous BLP meeting.