I never thought spending a week in the intensive care unit with my almost 98-year-old mom would feel like such a blessing.

Like many families during the past five months of the coronavirus crisis, we’ve been limited to window waves and brief distanced patio visits at Robbinswood Assisted Living, with phone calls and video chats when staff time allows.

Mom spent nine days at North Ottawa Community Hospital with a urinary tract infection that spread to her bloodstream. Last week, she underwent emergency surgery after her urologist, Dr. Caleb Fleming, said that if she didn’t she would surely die.

Through the past week-plus, I’ve had not only the gift of being with my mom every day, but also the honor of seeing the kind, compassionate and competent staff members at NOCH at work.

Last week, we honored the U.S. Coast Guard in our grand town. Although there’s no annual festival in their honor (there should be), this week and next we honor “Health Care Heroes” of the North Ottawa Community Health System for their courageous battle during these days of COVID-19 and beyond.

We lead off with Dr. Haney Assaad, an internal medicine specialist and hospitalist who played a key role in fighting Mom’s sepsis and putting her on the path to recovery.

“You know everyone and the staff is awesome,” he said.

Although Assaad says he is not keen on wearing a mask during his long work days, he knows it’s for the greater good.

“It’s an extreme nuisance, but what are you going to do?” the doctor said. “The rest of the world is doing it, too.”

A COVID-19 patient was in the ICU during my mom’s stay. Assaad said treating coronavirus-positive patients doesn’t scare him. NOCH staff takes extreme precautions, including using a negative pressure room and wearing face shields, gloves, gowns and other appropriate PPE.

“I’m more worried about the patients than I am myself,” Assaad said. 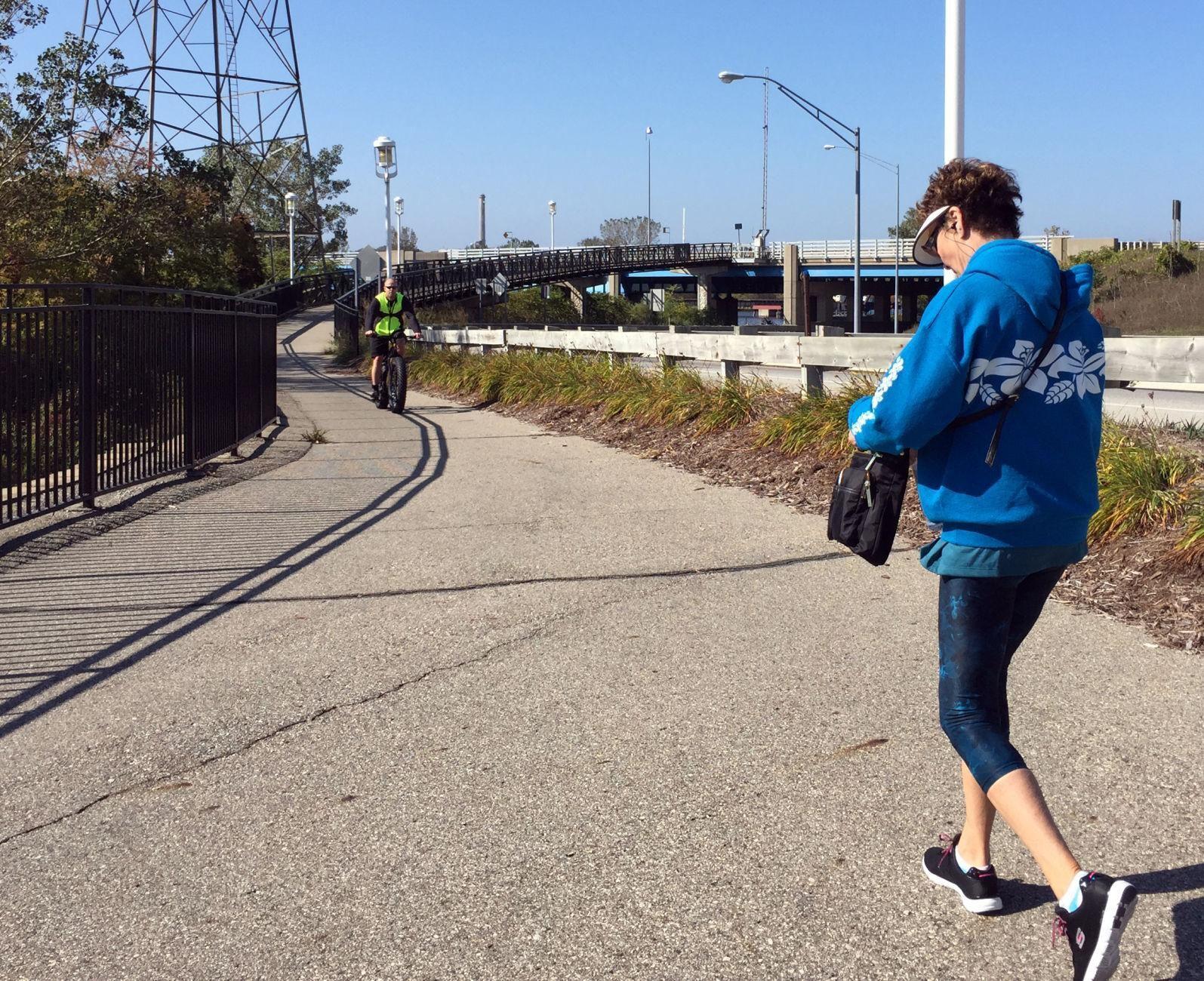 Portions of the nonmotorized paths connected to the bridges over the Grand River in the Tri-Cities will be closed intermittently during a $22.8 million construction project for the five-bridge network.

A virtual public meeting is planned for next week to take public input on a $22.8 million bridge project set for 2021-22 in the area of U.S. 31 and M-104, which connects Grand Haven, Spring Lake and Ferrysburg.

The Michigan Department of Transportation will host the online meeting from 4-5 p.m. Wednesday, Aug. 12.

The work slated, from south to north, is as follows:

This work will require a combination of traffic shifts and ramp detours during construction.

Construction is tentatively scheduled to begin in the spring of 2021 and will continue through the fall of 2022, with traffic impacts reduced during the summer season each year.

The functions of the nonmotorized pathways will not be permanently impaired in any way as a result of MDOT’s proposed project. Boat navigation will be maintained throughout the duration of construction.

During this construction period, two areas are being considered for contractor staging areas: a portion of Rix Robinson Park and the Ferrysburg carpool lot.

MDOT said public input is being sought to help the state agency recognize and address any public concerns that may result from the temporary pathway closures per a proposed “de minimis impact finding” under Section 4(f) of U.S. Department of Transportation Act of 1966. Provide your comments and questions to MDOT Public Involvement Specialist and Hearings Officer Monica Monsma at MonsmaM@Michigan.gov, or by mail to: Monica Monsma, MDOT Environmental Services Section, Van Wagoner Building, PO Box 30050, Lansing, MI 48909.

Here is how you can attend the virtual meeting:

Accommodations can be made for persons with disabilities and limited English-speaking ability. Large print materials, auxiliary aids or the services of interpreters, signers or readers are available upon request. To make a request, contact Orlando Curry by phone at 517-241-7462 or by e-mail at CurryO@Michigan.gov at least seven days before the meeting.

LANSING — A former Michigan State University head gymnastics coach was sentenced Tuesday to 90 days in jail for lying to police during an investigation into former Olympic and university doctor Larry Nassar.

Kathie Klages, 65, was found guilty in February of a felony and a misdemeanor for denying she knew of Nassar’s abuse prior to 2016 when survivors started to come forward publicly. She also was sentenced to 18 months of probation.

Klages testified at trial, and in a tearful statement Tuesday, that she did not remember being told about the abuse. She said she had been seeing a therapist to try to remember the conversations, and she apologized to victims if they occurred.

“Even when I don’t express it to others, I struggle with what I’ve been accused of and what my role in this tragedy may have been,” she said in court.

Two women testified in November 2018 that they told Klages in 1997 that Nassar had sexually abused them and spoke Tuesday in court ahead of the sentencing. One of the women, Larissa Boyce, testified that Klages held up a piece of paper in front of the then-teenager and warned that if she filed a report there could be serious consequences. 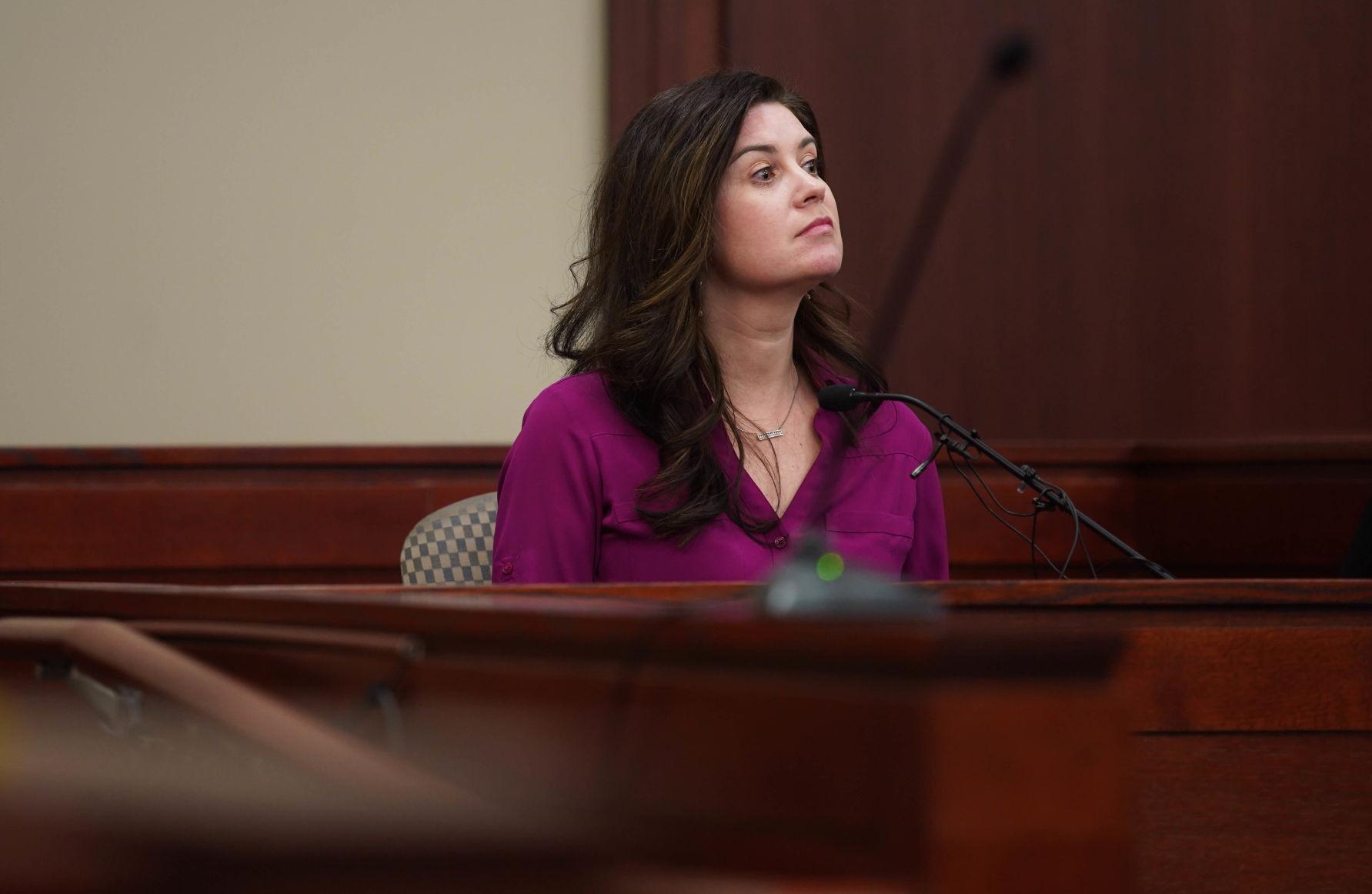 Witness Larissa Boyce answers questions from the defense attorney during the trial of ex-MSU gymnastics coach Kathie Klages at Veterans Memorial Courthouse in Lansing on Feb. 11.

“I am standing here representing my 16-year-old self who was silenced and humiliated 23 years ago and, unfortunately, all of the hundreds of girls that were abused after me,” Boyce said.

The other woman who testified but has not publicly identified herself read statements from other alleged victims. The Associated Press does not typically identify people who say they are victims of sex crimes unless they grant permission.

She said the way Klages refused to take responsibility and how their memories and testimony were refuted by the defense was “backwards and disappointing.”

“My hope was that she would be sorry and deeply apologize, but that is not the case,” she said. “The first and only adult I had ever told just canceled all of my intuitions that sexual abuse is real and painful. She silenced me not only when I was 14 but for 20 years, as I did not have the confidence to speak up about it again.”

Klages attorney, Mary Chartier, has said if the case had not involved Nassar, Klages would never have been found guilty. She called Nassar a “master manipulator” and said Klages sent her granddaughter, daughter and sons to Nassar for health care.

Chartier tried to mitigate Klages’ part in the abuse, saying she was among “thousands” who had been present in the room during Nassar’s treatments, including parents.

Nassar’s accusers say he molested them with his ungloved hands, often without explanation, while they were seeking help for various injuries. He sometimes used a sheet or his body to block the view of any parent in the room.

“Numerous people were told about the procedure – nurses, athletic trainers at other schools, psychologists, doctors and a high school counselor – and they did nothing,” Chartier said, quoting investigation reports. “Most notably, police and prosecutors were aware of the procedures, and they did nothing. To ignore this and claim that Mrs. Klages could have stopped the devastation wrought by Mr. Nassar is just plain false.”

Nearly 200 letters were submitted to the judge on Klages’ behalf, including from former gymnasts.

Chartier argued that jail was an unfit punishment for Klages as a non-violent first offender, and because of her age and a heart murmur, especially during the coronavirus pandemic. Defense planned to appeal the sentence.

Draganchuk said she was confident of COVID-19 safety protocols in the jail.

After the hearing, Boyce said she was relieved to have testified against Klages and Nassar.

“I feel much lighter. I feel like I can breathe. I feel like I can finally move forward and past all this,” Boyce said. “I hope that the fact that she got jail time deters other people and people truly believe children and women who come forward with allegations of assault.”

Klages is the second person to be convicted of charges related to Nassar’s case. Nassar’s boss at MSU, ex-College of Osteopathic Medicine Dean William Strampel, was sentenced to jail for crimes including neglecting a duty to enforce protocols on Nassar after a patient complained about sexual contact in 2014.