Dispatchers work the floor at Ottawa County Central Dispatch, which is located at the county’s Fillmore Complex.

WEST OLIVE — Isolation is a somewhat common situation in normal times for employees of the Ottawa County Central Dispatch Authority.

Dispatchers work 12-hour shifts, matching up with their counterparts in the police, fire and medical agencies.

But, unlike those counterparts, the dispatchers sit quietly at their consoles inside a separate building in the Fillmore Complex in the middle of Ottawa County. While police officers, firefighters and paramedics are out and about, dispatchers work hard in their lonely confines to make sure people’s emergency needs are met in a timely fashion.

The quiet of their workplace used to be broken up by occasional tour groups, visits by emergency professionals and trainings. Employees also used to attend fire department open houses and visit schools to educate people on what to do in an emergency and the importance of Smart 911.

Once the COVID-19 pandemic hit, the secure facility was even more firmly locked down.

“One of the aspects of my job is interaction with people,” Ottawa County 911 Executive Director Peter McWatters said. “Tours were suspended, as were in-person interviews with media and job applicants. We didn’t do as much outside training. We kept up with requirements by online training.”

At the start of the pandemic lockdown a little more than a year ago, everything stalled.

“It was really slow for about a two- to three-week period,” McWatters said. “Since then, there’s been a fairly steady increase to where we were before the pandemic.”

As the calls for help rose back to normal levels, dispatchers did notice an increase in responses to mental health, domestic situations and civil issues, he said.

Like every other business operation, Central Dispatch changed safety protocols for staff. That included temperature checks, wearing masks when away from their consoles and increased cleaning practices.

Everyone also got his or her own keyboards, McWatters said, and that practice will likely continue into the future.

Some Central Dispatch staff did test positive for COVID-19 and a few were briefly sick. But the cases were contracted outside of the facility and any staffing issues were brief, Smith said.

Call-taking protocols were also changed with the onset of the pandemic. Smith said they are constantly being updated.

“We implemented some screening questions for the caller,” she said. “We have done that for all responses – including police, fire and EMS.”

Smith said they do what they can to make sure emergency responders are prepared when they respond to a call for help. If a police officer can respond with a phone call, or talk to someone outside, that is arranged.

“Overall, people are cooperating with the dispatchers and the questions being asked,” Smith said. “Unfortunately, the questions have become normal and people expect it.”

A chance to bring attention to dispatchers and the important work they do is during the upcoming week, April 11-17, which is National Telecommunicators Week, McWatters said.

“We’re very fortunate to have the partners we do, but nobody sees us,” Smith said.

For more information on the Ottawa County Central Dispatch Authority, and to sign up for Smart 911, go to www.occda.org. For Smart 911, go under the “Resources” drop-down menu.

The Ferrysburg City Council on Monday approved a master plan for upgrades to the city’s Fire Barn Park. Volunteers are shown putting together a play area at the park last year.

Fire Barn Park, nestled behind the Ferrysburg Fire Department on the corner of North Shore Drive and Third Street, was a major topic of discussion at this week’s meeting of the Ferrysburg City Council.

The council received a revised site master plan for the park late last week from the city’s Recreation Commission that details all proposed changes to the park. The plan was unanimously approved by the council at Monday’s meeting.

Montgomery went on to detail how the current route of the path creates a “pain point” for the Fire Department, as large trucks frequently need to cross paths with pedestrians and bikers. This also creates a blind spot for bikers and runners using the path.

Parking is also a top priority for the new additions to the park. Montgomery described how more parking would be beneficial to host more visitors, but also to meet or exceed the requirements for the Americans with Disabilities Act (ADA).

The city will apply for grants in April 2022 to complete the remainder of the park revisions detailed in the master plan. Some of these changes include a large green space, a universally accessible splash pad, an accessible covered pavilion and pickleball courts.

The committee in charge of the park plan spent time walking the location and meeting with experts to ensure they were considering all possible aspects of how to make the park accessible for the community.

“I just want to express my appreciation and gratitude to the (Recreation Commission),” Montgomery said. “They’ve been working for almost a year (on it). ... They really did an outstanding job.”

The discussion about ADA requirements and park changes comes as part of the City Council’s 2021 goal of focusing on improvements to inclusivity for various locations in the city. 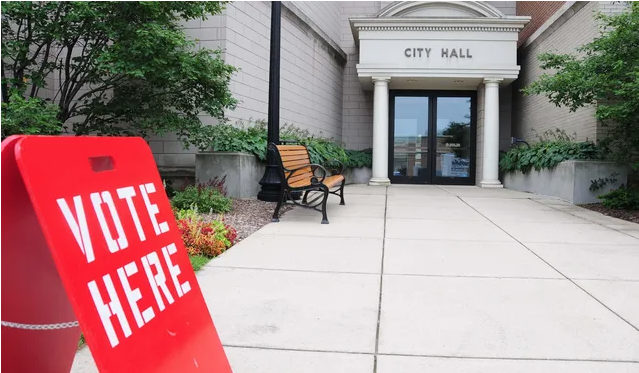 “We ran a very, very secure election process in Ottawa County and the accuracy was top notch,” Roebuck told The Sentinel. “Considering all of the challenges that our local clerks had to deal with administering elections in a pandemic last year – they just did an incredible job and I’m really proud of them.”

The audit measured local clerks’ performances by verifying election results, determining if local elections staff had been properly trained, whether ballot dropboxes were properly sealed and other election integrity matters.

Roebuck, a Republican, and other local and state election officials from both parties have dismissed false claims about the accuracy of the 2020 election. He hopes by publicly releasing the audit report, Ottawa County voters can gain a better understanding of the elections process.

“It was anything but normal, in terms of the scrutiny and the attention that was on the election process and the results of the election,” Roebuck said of the 2020 election. “As our team was in discussions about how we wanted to conduct the post election audit, we really felt like there was some opportunity for growth for us in terms of communicating better with our residents.”

Local and county elections officials will use the audit’s findings to adjust their practices for future elections. The report includes recommendations to address issues like extra ballot applications and unsealed ballot containers following the election.

“We do want to address these things in real time,” Roebuck said. With absentee ballots for the Tuesday, May 4, election already being mailed out, another post-election audit isn’t far away.

“The great thing about our area is the collaboration and the partnership we have with our local clerks,” Roebuck said. “What’s really cool is that during the audit, really in real time, we are having those conversations with the clerks. When they came to pick up their supplies from the audit process, we were having those conversations ... just kind of addressing and talking through issues where our office can improve in our training.”