When I was growing up, I was fascinated by the Little House books by Laura Ingalls Wilder.

As I walked to school in the mornings, I pictured what the land might have looked like back in the 1800s with no houses and just open fields. In the books, I loved the pioneer spirit of creating a home in an unsettled territory and how the family relied on each other and their close-knit community.

Let’s imagine someone living during the time when the Wright Brothers flew their first powered plane in 1903 and when Apollo 11 landed on the moon in July 1969. A Spring Lake resident named Etta (Koster) Bolt, who was born in 1878 and lived until 1974, experienced these historic events. Etta saw tremendous change in the world – advances in manufacturing, refrigeration, air travel, transportation, as well as radio/television, vaccines and computers were happening all around her.

A local relative said, “When she saw Neil Armstrong walk on the moon, she exclaimed to her son, ‘Do you think that really happened?’” This event was unimaginable to her.

Etta was born in a house on the corner of Division and Liberty streets in the village of Spring Lake. Her parents were immigrants, and they spoke Dutch and English.

For Etta’s generation, church was the center of life in small towns like Spring Lake. She attended the Spring Lake Christian Reformed Church when it was located on Division Street, near her childhood home. The services were in Dutch, and the sermon would last about one hour. When congregation members grew sleepy, they would stand up to feel refreshed. The women even passed small silver boxes with cologne to each other. According to the Spring Lake Community Centennial 1869-1969, “The horses seemed to know when it was time to leave as they would clatter and neigh in their stalls, and the men would try to be the first out to quiet them.”

Members of the congregation were like family. It was especially important for people who had recently immigrated from the Netherlands to have that strong sense of community as they adjusted to life in America.

When Etta’s father, Jan (pronounced John) Koster, came to Spring Lake in 1869 at age 24, he spoke only Dutch. He was one of thousands emigrating to the United States that year. To put this in perspective, from 1820 to 1900 more than 340,000 people emigrated to the United States from Holland.

After Jan adjusted to life in America, he helped people who came from the Netherlands find places to live and even met them at the train station when they first arrived.

As a young woman in the late 1800s, Etta worked at Beaudry’s Dry Goods Store in Grand Haven. Etta worked at Beaudry’s for 12 years, where she earned $3 a week. In the Directory, People of Northwest Ottawa County, she recalled that her commute from Spring Lake to Grand Haven on the Interurban would have cost 60 cents each week, so she took a horse-drawn bus to work instead to save money.

In 1894, Etta’s father bought the store where he had been employed and transitioned it from dry goods to groceries. He sold the store to his employee, John Bolt, in 1904; and, in 1909, Bolt married Koster’s daughter, Etta.

When her husband John sold the store, he and Etta opened a business in Muskegon, where they lived until his death in 1939.

After the death of her husband, Etta returned to Spring Lake, where she had a house built across the street from her childhood home and church. “It was from this home that she recalled her early years as part of an immigrant family and community that lived in a town with dirt roads and no electricity. As an elderly widow, she reflected on the people and places that shaped her life,” said Etta’s relative.

She wrote this poem in 1961 as she watched the church of her childhood torn down:

Have you ever watched a church torn down?

The oldest church, perhaps, in town.

Over 80 years ours stood so strong,

Where God was praised in prayer and song.

Through windows I watched across the way,

Where timbers crashed, then quietly lay.

And oh, the steeple! I breathed a sigh,

No more pointing to the heavenly sky.

With doors swung wide for me and you.

Departed members have their reward,

So, let’s give thanks and praise our Lord!

After the old Spring Lake Christian Reformed Church on Division was torn down in the early 1960s, two duplexes were built on the land, and the church is now located on Lake and Fall streets. 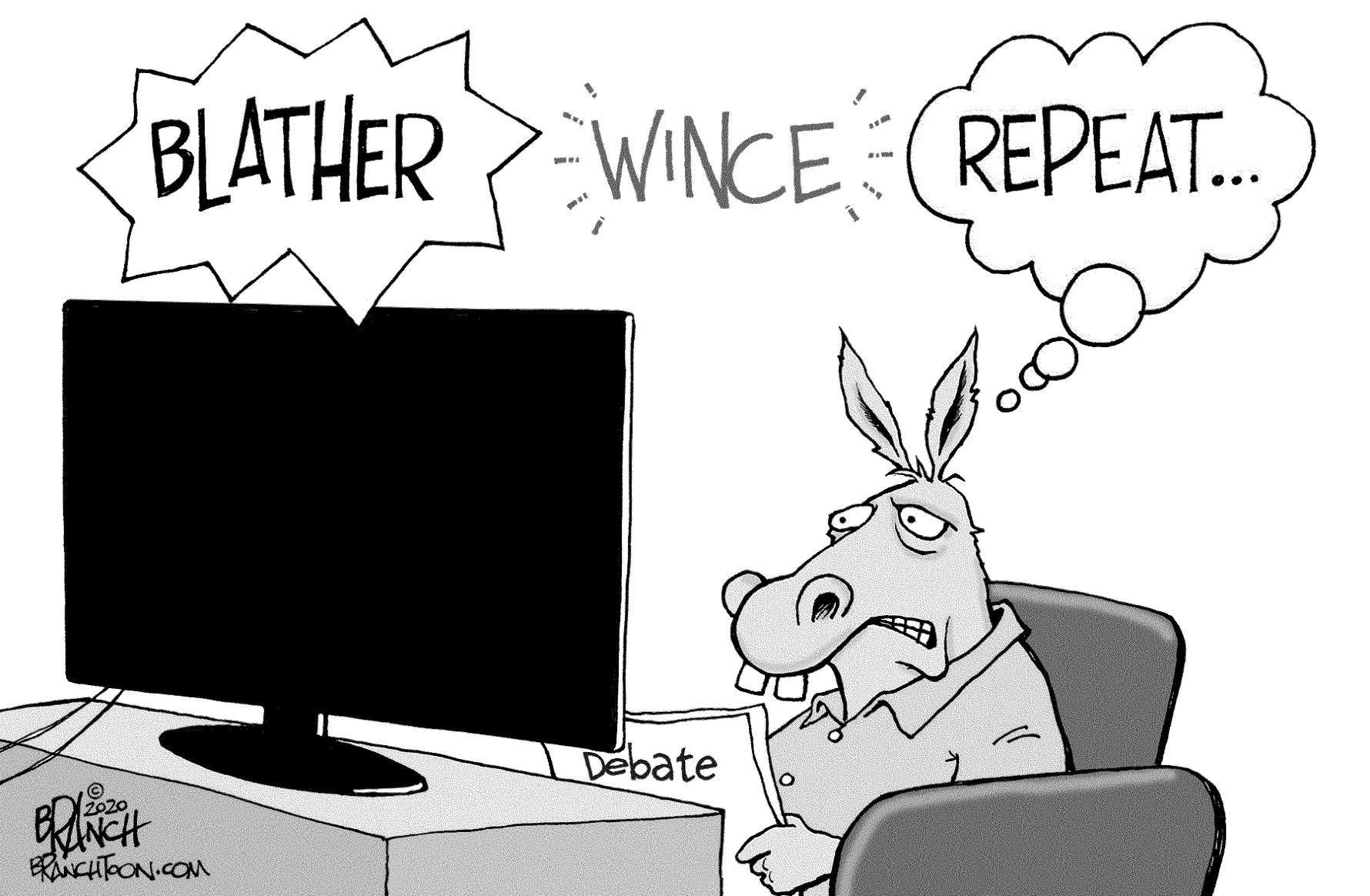 The only thing that can be said about former New York City Mayor Michael Bloomberg’s first appearance with his fellow Democratic presidential candidates in Las Vegas last week was that Mike did not get it done, as his campaign ads promise he will if he becomes president.

He was boring, expressionless and could not defend himself against past racist, sexist and misogynistic comments, including one mentioned by Elizabeth Warren, who said Bloomberg once referred to women as “fat broads” and “horse-faced lesbians.” He also refused to release women who worked for him from sexual harassment nondisclosure agreements, apparently because that would reveal even more of his outrageous behavior than is already known.

While President Trump was mentioned a few times, most of the “debate” was about the candidates carving up and interrupting each other. Watching it made it sound like there is nothing good about America, homelessness is a national plague (mostly in cities and states run by Democrats, which the moderators failed to mention), and according to some of the candidates, most people are unhappy with their health insurance and want the government to take over.

Democrats call it “Medicare for all,” but it is the single-payer option, a government-run insurance program, which likely means the federal government will in effect become your doctor, deciding who gets care and who doesn’t, who ultimately lives or dies, based on age and diagnosis, and whether you take more from the treasury than you contribute in taxes.

Much of the second hour of the debate focused on the cult of “climate change,” which most Democrats seem to believe in more than they believe in God. The overpopulated panel of moderators failed to ask Bloomberg about a Fox News report (perhaps because they hate all things Fox) that a program funded by Bloomberg pays the salaries of lawyers in the offices of some state attorneys general to “pursue climate-based litigation.”

According to the Daily Wire, a conservative news and opinion site, “The arrangement, which currently pays the salaries of Special Assistant Attorneys General in 10 Democratic AG offices,” the Fox report found, “is drawing new scrutiny now that Bloomberg is running for president. The New York University School of Law’s State Energy & Environmental Impact Center, which was started in 2017 with $5.6 million from Bloomberg’s nonprofit, hires mid-career lawyers as ‘research fellows’ before providing them to state AGs where they assist in pursuing ‘progressive’ policy goals through the courts.”

A number of Republican attorneys general, the Daily Wire reported, “have raised concerns about Bloomberg’s funding of government lawyers, especially since he began his 2020 campaign.” It quoted West Virginia Attorney General Patrick Morrisey: “This is a fundamental question of ethics and who’s running our government. When you actually get to place someone under a specific agenda and then pay them and they’re within the office, that starts to call into question whether there are multiple masters within an attorney general office and that starts to really stink.”

Bloomberg appears to be using his considerable wealth in ways other than paying for those ubiquitous TV ads. If his record as mayor of New York City is any indication of how he would behave as president, he should not even be allowed in the tourist line at the White House, unless you are comfortable with government telling you how large a soft drink you can consume, whether salt should be available at restaurants and you are fine with your guns being taken away, along with other constitutionally protected liberties.

While Bloomberg’s money might keep him on political life-support, his credibility as a presidential candidate took a major hit Wednesday night from which he is unlikely to recover.

Editorial
Other Views
Boy Scouts must use bankruptcy to a moral purpose, not just financial
The Dallas Morning News
02.25.20

The declaration landed with a thud. The 110-year-old Irving, Texas-based institution we know as the Boy Scouts of America declared bankruptcy last week in what is a very messy fight over sexual abuse claims going back decades.

The details here are complex and even arcane. As The Wall Street Journal has reported, there are some 275 pending lawsuits over sexual abuse and another 1,400 more claims waiting in the wings. Most of these – an estimated 90 percent – are eligible to come forward because several states have revised the statute of limitations to allow claimants to sue over abuse decades in the past.

But the top-line out of this legal morass is clear and even simple, if also hard to do: The Boy Scouts of America needs to lead in showing how a venerated organization can do right by victims as it works to restore its ability to serve as an important cultural institution.

And it should be clear that, for millions of Americans, the Boy Scouts has been an important cultural institution for decades. The Scouts have long taught leadership, self-reliance, resiliency, creativity and teamwork, and all in service to a larger purpose. The Scouts taught public service and civic engagement to generations.

But the Scouts have also been wounded in a culture war and held fast to indefensible positions for far too long in terms of allowing for gay and transgender scouts. The organization has since reversed its position to allow these Americans to serve in its ranks and have also pulled girls into the organization in ways that should serve them, as well as the institution.

Now the organization has to account for decades of denials and obfuscation in terms of sexual abuse. The facts show that there were young Americans who joined the Scouts to learn how to live with honor and courage but who were instead shown dishonor, abuse and cowardice. Doing right by these victims to the extent possible is the only thing the organization can do to show that, as an institution, it will live by the ideals it always needed to serve.

It is possible to do that through the bankruptcy process that will now organize claims in federal court where assets and allegations can be sorted out legally and fairly and a compensation fund can be created. But rather than a purely legal process, the Boy Scouts need to demonstrate an understanding that this is about more than money and protecting assets. Transparency fosters integrity, compensation signals acknowledgment of culpability, and accepting fault where appropriate are crucial components of leadership.

And we should all hope that the Boy Scouts of America can be that social institution that fosters leadership and service that we’ve always needed it to be.