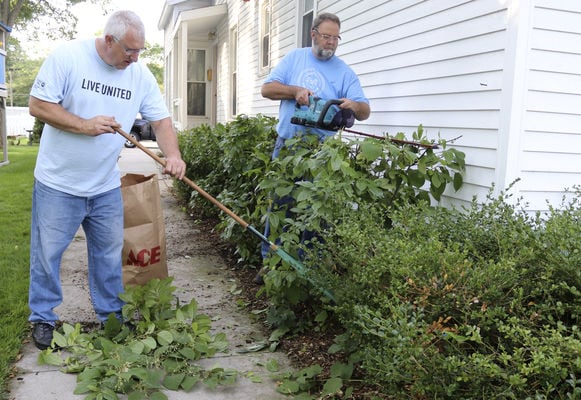 LightCorp’s Jim Kramer and Marc Langeland trimmed hedges and spruced up the landscaping at The People Center in Spring Lake on Thursday. 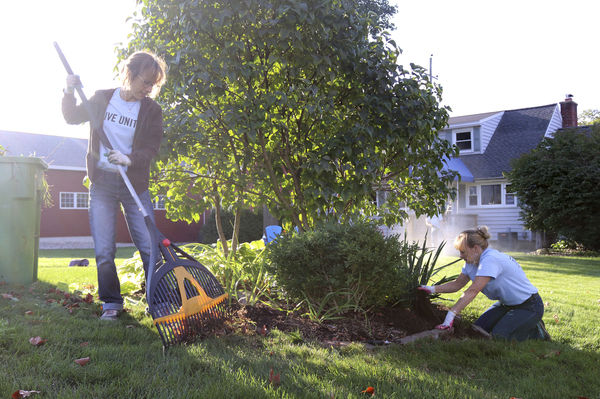 More than 60 teams of volunteers helped at 45 projects Thursday during the Greater Ottawa County United Way’s Day of Caring. Pictured: Helen Baldus and Cindy Moe were among the LightCorp volunteers at The People Center.

LightCorp’s Jim Kramer and Marc Langeland trimmed hedges and spruced up the landscaping at The People Center in Spring Lake on Thursday.

More than 60 teams of volunteers helped at 45 projects Thursday during the Greater Ottawa County United Way’s Day of Caring. Pictured: Helen Baldus and Cindy Moe were among the LightCorp volunteers at The People Center.

Throughout the day, 650 individuals volunteered their time across Ottawa County on Thursday.

Sixty-four teams tackled 45 project sites as part of the Greater Ottawa County United Way’s Day of Caring. They were expected to volunteer a total of 3,720 hours and leverage almost $92,000 in support, according to Shannon LaHaie Behm, vice president of volunteer engagement for the local United Way.

LightCorp employees were among local businesses and organizations that gave back Thursday morning. The LightCorp group spruced up landscaping, cleaned the food pantry and sorted clothing at The People Center in Spring Lake.

The group helped cross every item off the list, said Karen Reenders, director of The People Center. Being the center’s only employee, Reenders said she appreciates having the volunteers because they’re able to get a lot accomplished.

As Cindy Moe worked on a flowerbed, she said Thursday marked her eighth year of participating in the annual Day of Caring. Moe noted that being selfless is one of LightCorp’s core values.

Staff from the Grand Haven company have participated in the Day of Caring for the past decade, LightCorp employee Helen Baldus said.

Throughout the year, employees have been given one paid day to volunteer and give back to the community. So far, 70 of the 100 employees have participated, and they’re aiming to have 90 percent participation, Baldus said.

LightCorp President Marc Langeland noted that the Day of Caring is one of the ways employees volunteer throughout the year. Other opportunities have included the Feed America Food Truck, Habitat for Humanity, No More Sidelines, Give a Book a Home and local school programs.

In addition to giving employees time to volunteer, Langeland said they also provide them with the resources to make it possible.