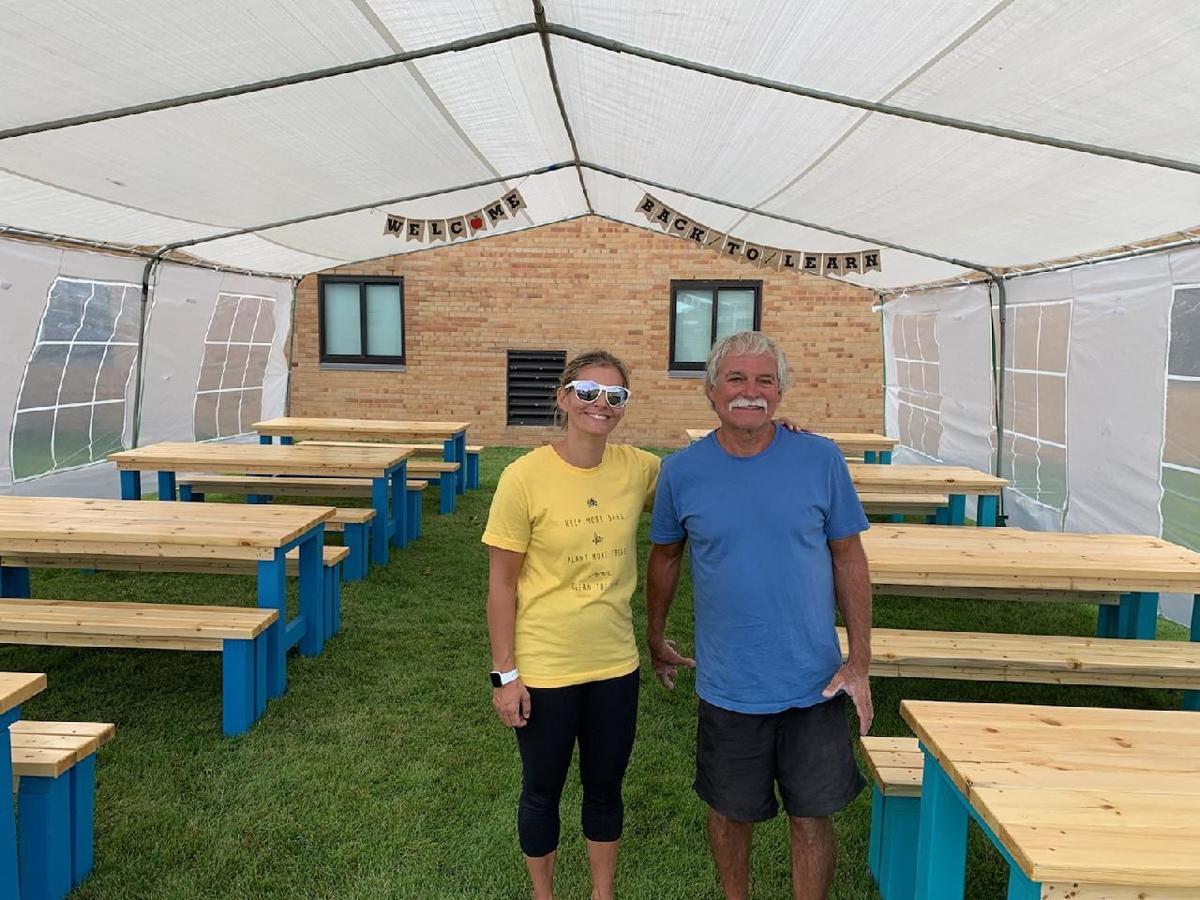 Martha Fitzpatrick and her father, Dan Drzewcki, both of Spring Lake, pose inside the outdoor classroom at Reeths-Puffer Intermediate School. 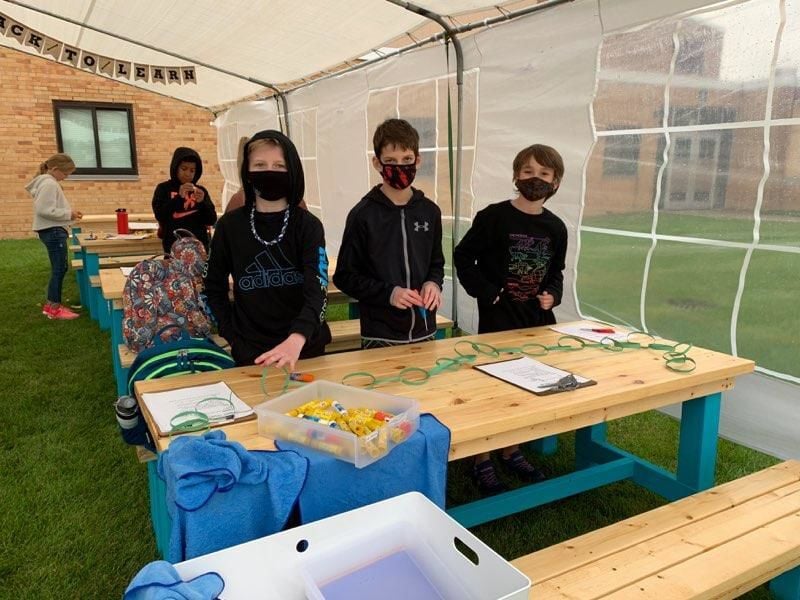 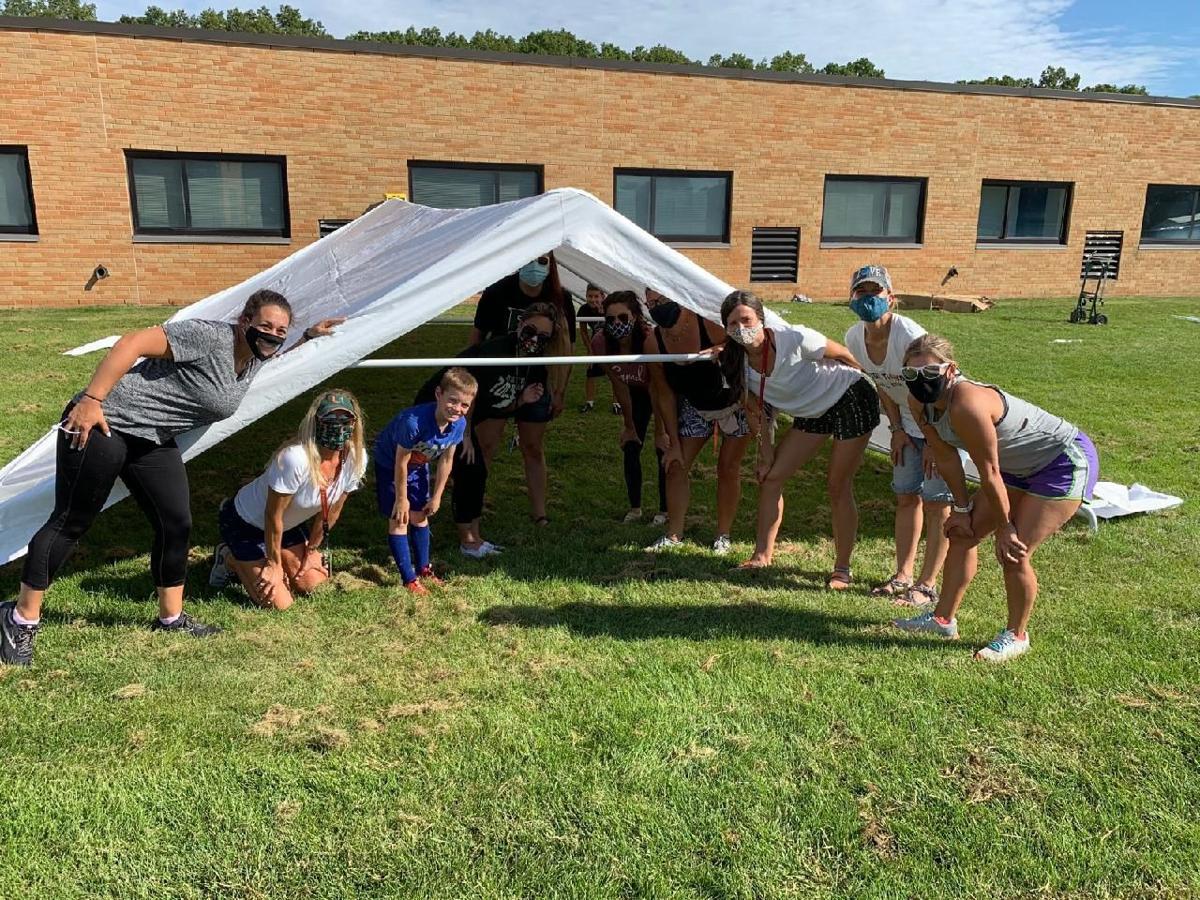 Family, friends and teachers help raise a tent for an outdoor classroom at Reeths-Puffer Intermediate School in Muskegon. 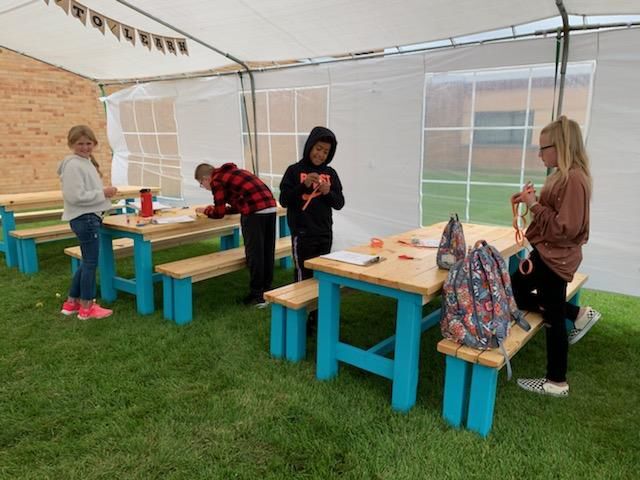 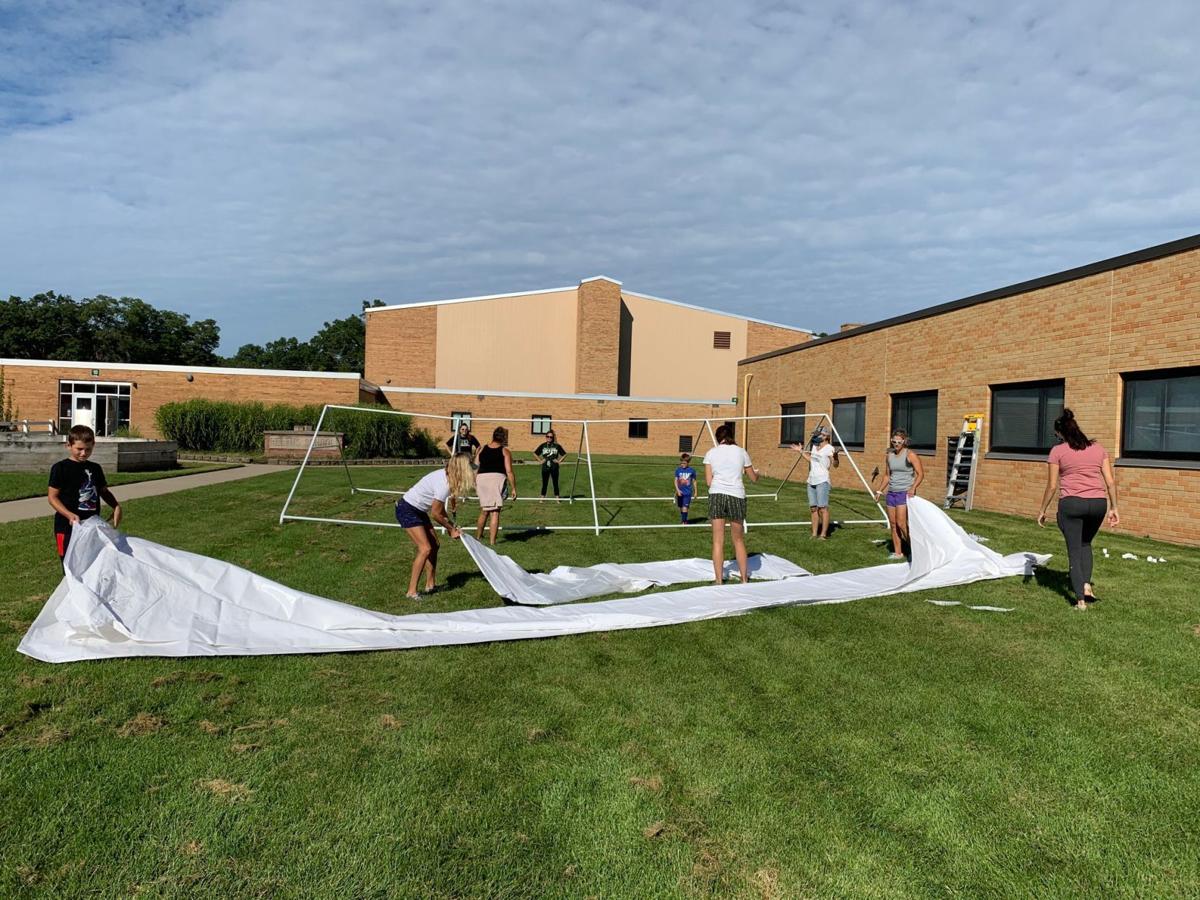 Martha Fitzpatrick and her father, Dan Drzewcki, both of Spring Lake, pose inside the outdoor classroom at Reeths-Puffer Intermediate School.

Family, friends and teachers help raise a tent for an outdoor classroom at Reeths-Puffer Intermediate School in Muskegon.

Strong winds couldn’t take the wind out of a local teacher’s sails when it blew her new outdoor classroom over the school during the Labor Day weekend.

“When you have lemons, you make lemonade,” said Martha Fitzpatrick of Spring Lake.

So Fitzpatrick, a sixth-grade math and science teacher at Reeths-Puffer Intermediate School in Muskegon, consolidated the remains of her tent with an awning donated by a local business and was still ready to go when classes started Sept. 8.

Even before schools shut down in the spring because of the COVID-19 pandemic, Fitzpatrick said the idea of creating an outdoor classroom had been spinning around in her head.

“I knew of other schools with outdoor classrooms and back in June started planting the seed with the principal,” she said.

She researched the possibility and sent the ideas to Principal Scott Panozzo, who agreed that the ideas were good, but that there was no funding available.

Fitzpatrick said she started with a teacher funding website called Donors Choose, but found it took too much time and was too restrictive. That’s when she received permission from the Reeths-Puffer school district to start a GoFundMe page and raise the estimated $2,000 needed to purchase a large tent and build the picnic tables to go along with it.

Fitzpatrick said she knows a retired contractor who has done some work for her before – her father, Dan Drzewicki. The Spring Lake man estimated it would cost about $200 each to build the solid pine tables with removable benches.

So, the GoFundMe was launched and Fitzpatrick was able to purchase a large tent for $600.

She gathered up family, friends and teachers to put up the tent before Labor Day. In addition, J&L Canopy donated the use of an awning to make an additional classroom space.

On Labor Day, the family was bringing up all the tables and benches when they discovered the heap of tent on the other side of the school building.

Again, everyone got together and used the sides of the destroyed tent to put wind blocks on the J&L Canopy awning, unfortunately putting them back down to one outdoor classroom.

Due to safety concerns, the company that supplied the purchased tent refunded their money, Fitzpatrick said. That money will help them work toward a vision supplied by the principal – a series of shade sails in alternating colors to expand the outdoor classroom area.

Fitzpatrick said they are still waiting for the refund and still working to get to their $2,000 goal on the GoFundMe page, called “Let’s Learn Outdoors.” As of Tuesday, the fund was at $1,785.

Fitzpatrick said any money raised above the goal would be used to help create additional outdoor classroom space.

The space Fitzpatrick and her family created is a 20-by-30-foot tent. There are eight tables and 16 benches for her 19 students.

She is hoping to be able to use the space well into November before the canopy company returns to take it down for the winter.

Which presidential candidate are you voting for?