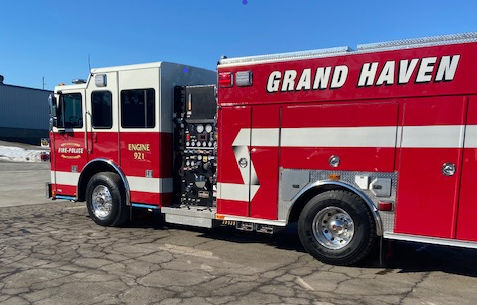 The Grand Haven Department of Public Safety will take delivery of this new pumper by the end of the month. It replaces a vehicle from 1982. 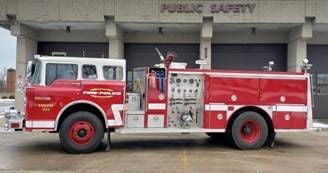 The 1982 pumper, pictured here, was refurbished in 2014. It will be replaced by the new truck.

The Grand Haven Department of Public Safety will take delivery of this new pumper by the end of the month. It replaces a vehicle from 1982.

The 1982 pumper, pictured here, was refurbished in 2014. It will be replaced by the new truck.

A new fire truck expected in the station at the Grand Haven Department of Public Safety later this month will replace a 39-years-old truck.

The 2021 Sutphen Pumper will replace a 1982 Ford Pumper, according to Public Safety Director Jeff Hawke.

Firefighters got extended use out of the older truck when the department invested $30,000 in 2014 to do body work, paint, redo upholstery, tires, refurbish storage cabinets and replace some tools, equipment and hose.

The pumper has a 750-gallon water tank and pumps water at a rate of 1,250 gallons per minute.

Special features on the new truck are a 360-degree camera for the driver, a storage carousel for easier access to self-contained breathing apparatus and lights powered by an inverter.

There is no on-board generator, Hawke said. The LED emergency lights use less power and scene lighting is mostly battery powered.

In an about face from previous purchases featuring trucks with electronic pump panels, the department chose to go with a mostly manual pump panel, Hawke said.

The last time a truck was purchased for GHDPS was 14 years ago. The department purchased a 2007 Alexis Pumper. That will now be a backup truck with the new pumper being the first out the door, Hawke said.

The next truck to be replaced or refurbished will be the 2004 Sutphen aerial platform. That is anticipated to be done in the 2030-34 timeframe, he said.