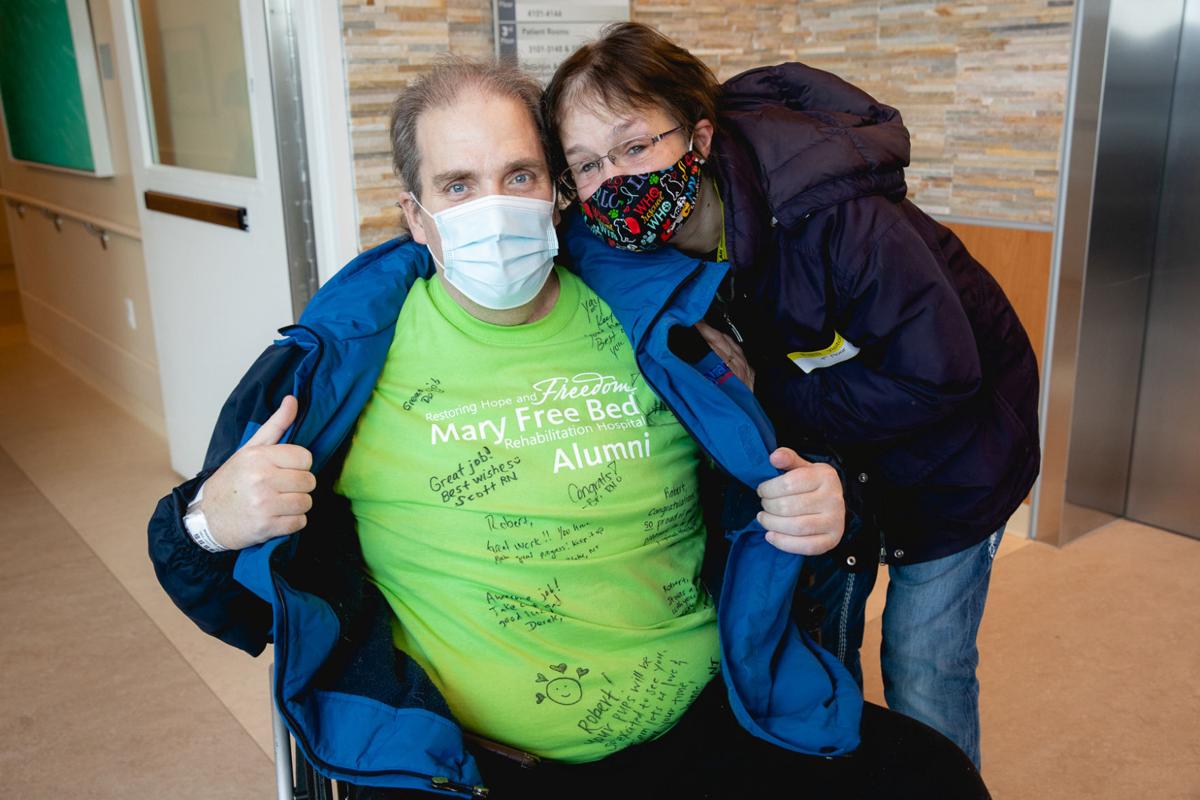 Robert and Jody Woonacott pose as Robert is released from Mary Free Bed Rehab Hospital in Grand Rapids. Robert is recovering from a 140-day battle with COVID-19 that placed him into a six-week coma and paralysis in his lower body. Jody also was in the hospital for a week with double pneumonia. 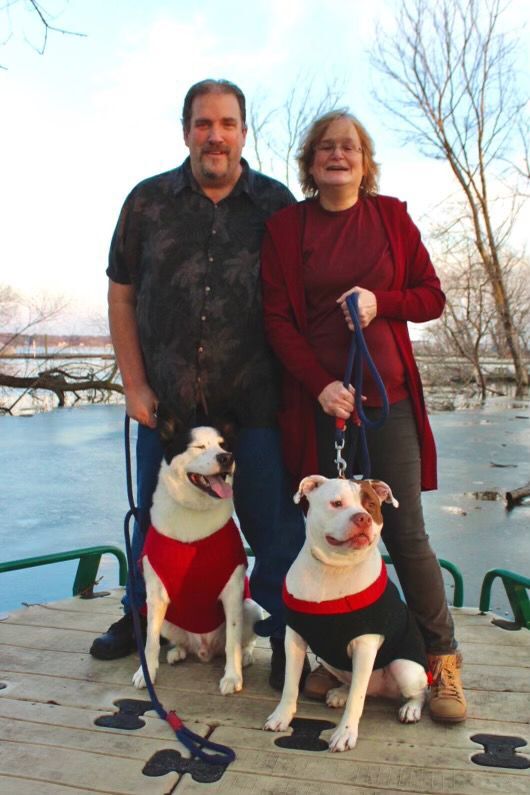 Robert and Jody Woonacott with their two dogs, Koda and Winston. 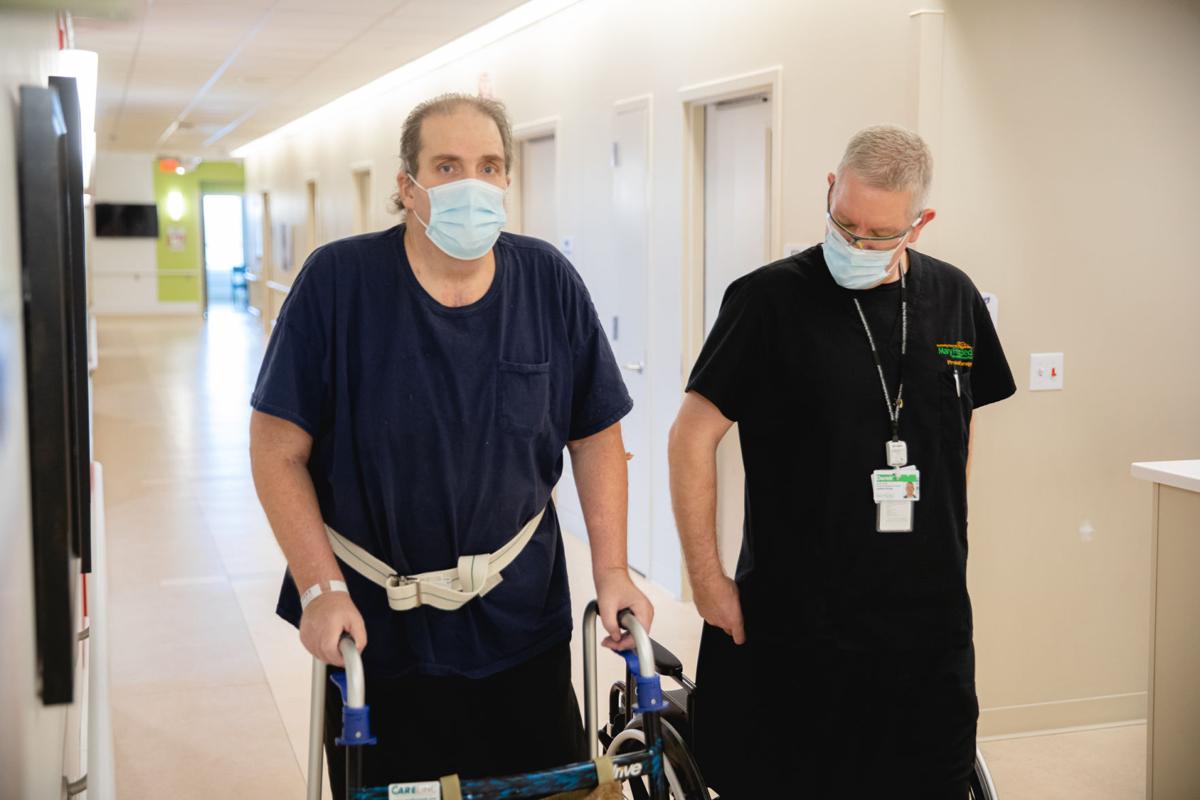 Robert Woonacott uses his walker to strengthen his legs at Mary Free Bed Rehabilitation Hospital on his journey toward a full recovery from COVID-19. Woonacott was discharged from Mary Free Bed on Feb. 19 and is now home with his wife and two dogs. 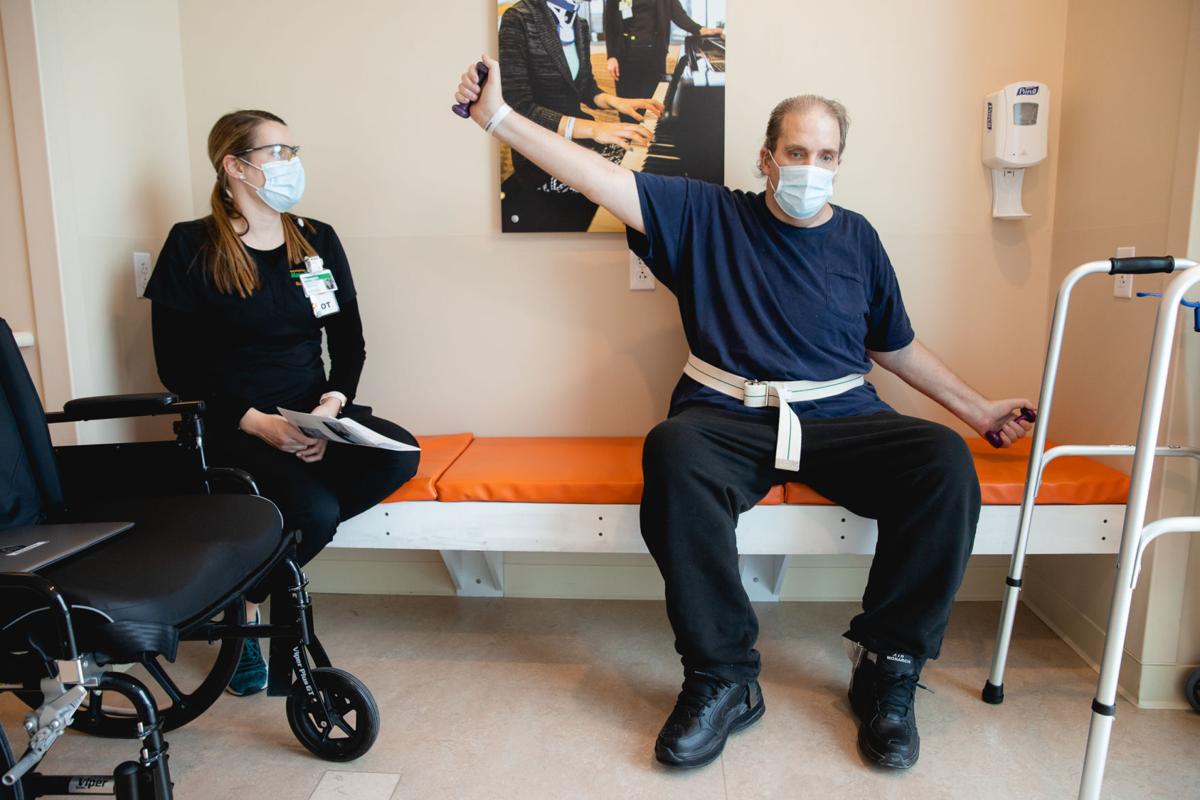 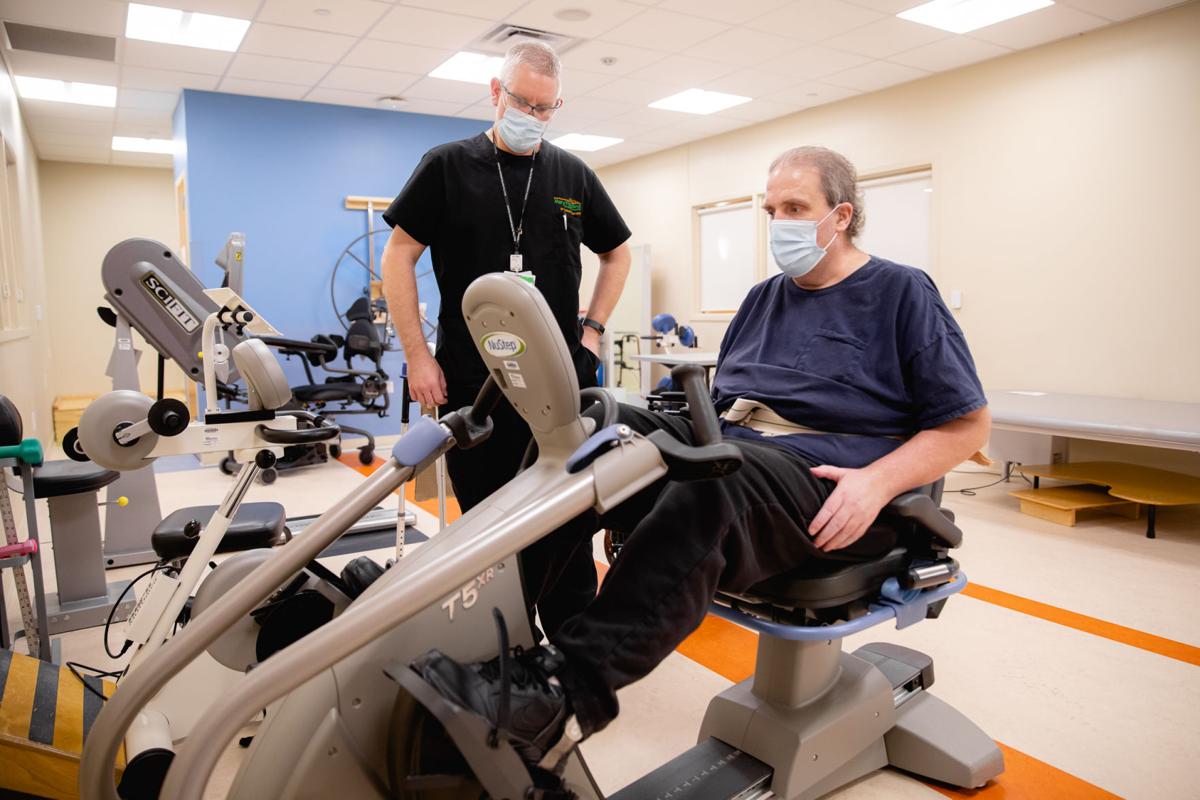 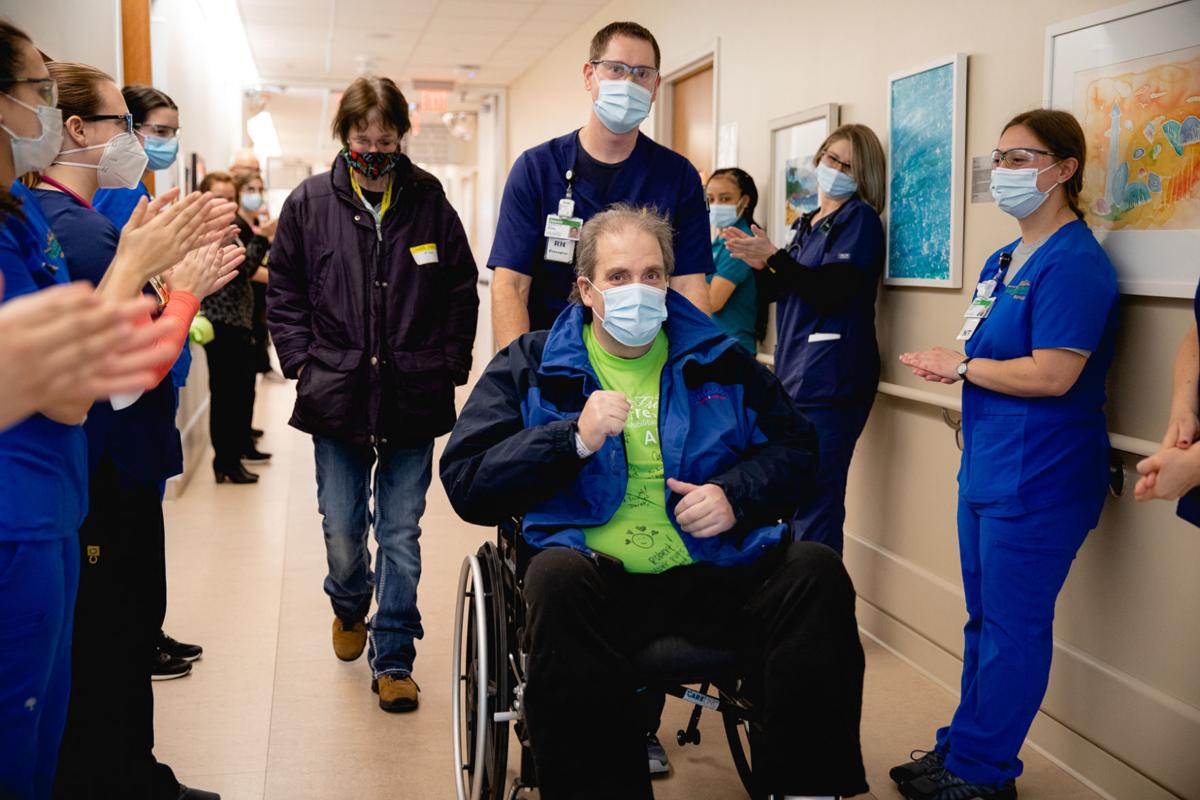 Robert Woonacott celebrates with the staff of Mary Free Bed Rehabilitation Hospital on Feb. 19 as he graduated from his rehab and was discharged to finally go home after a 140-day battle with COVID-19.

Robert and Jody Woonacott pose as Robert is released from Mary Free Bed Rehab Hospital in Grand Rapids. Robert is recovering from a 140-day battle with COVID-19 that placed him into a six-week coma and paralysis in his lower body. Jody also was in the hospital for a week with double pneumonia.

Robert and Jody Woonacott with their two dogs, Koda and Winston.

Robert Woonacott uses his walker to strengthen his legs at Mary Free Bed Rehabilitation Hospital on his journey toward a full recovery from COVID-19. Woonacott was discharged from Mary Free Bed on Feb. 19 and is now home with his wife and two dogs.

Robert Woonacott celebrates with the staff of Mary Free Bed Rehabilitation Hospital on Feb. 19 as he graduated from his rehab and was discharged to finally go home after a 140-day battle with COVID-19.

There are experiences in life that will make you truly cherish every waking moment. Surviving COVID-19 has had that effect on a Grand Haven man.

Robert Woonacott, 56, contracted the virus in October 2020 and battled for his life over the next several months.

His perception of COVID-19 previously was as a “flu bug,” he said, but when he and his wife Jody decided they should be tested in late September, his perception became life altering.

“I literally don’t remember anything,” the IT specialist for Graphics Heating and Cooling said. “My wife remembers what she told me was one morning I woke up and I could barely breathe, and I told her to call 911.”

The couple were both rushed to Mercy Hospital in Muskegon. Robert was immediately provided a ventilator in the ambulance.

Jody was diagnosed with COVID-19 and double pneumonia; she was the lucky one. Robert slipped into a coma that lasted six weeks.

The coma was an experience Woonacott says he still is trying to grasp. He described it as living in a parallel universe.

“It was like a dream that was so real to me even when I came out of the coma,” said the father of two. “I felt like I was in a totally different world.”

The alternate reality consisted of a government that issued a proposal to cut down on the population by freezing humans for 3-4 years. After that point, you were thawed and given a life, a life where Woonacott chose to become a police dog trainer.

“The funny part about it was, I only ended up training my own two dogs,” he said.

His two dogs, Koda and Winston, are a part of a list of simple things Woonacott enjoys, which also includes flying his drone and camping in Hesperia.

His dogs, along with his daughter, played a crucial role in Woonacott being revived from his deep slumber. At the end of his dream, he recalls being in a shipyard with his dogs, with a rifle on his lap.

“I was just patting my dogs and decided something,” he said. “I just said, ‘Man, I’m so tired, I don’t want to do this anymore. I just want to go home.’”

And then, suddenly, he heard a faint voice calling for him off in the distance.

“Next thing you know, I opened my eyes and I look over and it’s my daughter,” Woonacott said. “I got pretty emotional after that.”

Woonacott’s six-week coma had him sent to a hospital in Ann Arbor, where he said he almost “lost the farm” three separate times.

Grasping reality remains a challenge, as Woonacott says he still deals with bizarre hallucinations. He recalled his wife training to become a nurse as she extracted blood from his arm and becoming frantic when nurses removed his dialysis.

“I had to come to terms with what was real and what wasn’t,” he said. “Over time, I came to the realization that a lot of them weren’t true.”

One of the first realizations he had was the state of his body. He had lost more than 100 pounds and struggled with his inability to move his limbs. Both of his legs had paralysis and his left arm wasn’t responsive.

“When I left Ann Arbor, there was no way I could walk,” he said.

Woonacott was transferred to a nursing facility, where he spent the next several weeks slowly recovering.

On Feb. 5, he arrived at Mary Free Bed Rehabilitation Hospital in Grand Rapids for intensive rehabilitation. He says he was immediately injected with energy by the staff, especially his physical therapist, Alexis Cherven.

“We hit it off,” Cherven said. “He came in pretty nervous of what the expectations here were because he spent so much of his time in a bed hospitalized. But I came in and said, ‘Let's do this work so we can get you back home.’”

Cherven said Woonacott attacked each day highly motivated. He wanted progress each day, racking up steps to get himself walking again.

“When he came in, he was only really able to walk 15 feet,” she said. “That was our No. 1 thing, to get him to walk again. We worked on stairs, too, because he has those at home.”

Cherven said because Woonacott lost a significant amount of muscle strength in his ankles, custom braces were built for stabilization.

“Once he got those, we saw a lot of progress,” she said. “He started with 15 feet and finished walking 668 feet. By the time he left, he was able to climb a full flight of stairs on his own.”

Woonacott regained his confidence, strengthened his legs and mind, and was discharged from Mary Free Bed on Feb. 19. He gives credit to the staff and his wife, who he says has been a great help while he’s been home and throughout this journey.

Impact of the virus

As Woonacott still is steadily improving on his journey back to full recovery, he’s received a new perspective on COVID-19, and the existence of life.

“I thought the virus wasn’t that bad of a deal,” he said, “but it attacks people differently. You never know what it’s going to do to you and family members. Try to imagine what life is like for me right now – I’m just happy to be alive.”

He noted that society needs to take this virus seriously. And, if you’re a nonbeliever, just take a trip to a hospital, he says.

For Chevren, who’s worked primarily at the COVID-19 isolation unit, she’s continuously floored by the impacts the virus has on each patient.

“There’s a pretty long-term effect, and this has been really eye-opening for me,” she said. “It’s one of the coolest things in my career so far because we help these people. I’m very thankful we opened this up so that people aren’t confined to their rooms.”

Chevren said Woonacott is not one to share his story, but the impact the virus has done has changed his perspective.

“He felt this desire to motivate others,” she said. “For someone to be as vulnerable about what he’s gone through, so that others can understand what this virus can do to their body.”

Woonacott says his battle with COVID-19 has ultimately changed his entire outlook on life.

“I am going to change my life,” he said. “I am going to enjoy life more and treat people in my life better, better than I ever did before. I’m not going to give up on anybody. ... I’m going to live my life to it’s fullest because I’ve been given a second chance, and I’m going to make it great.”