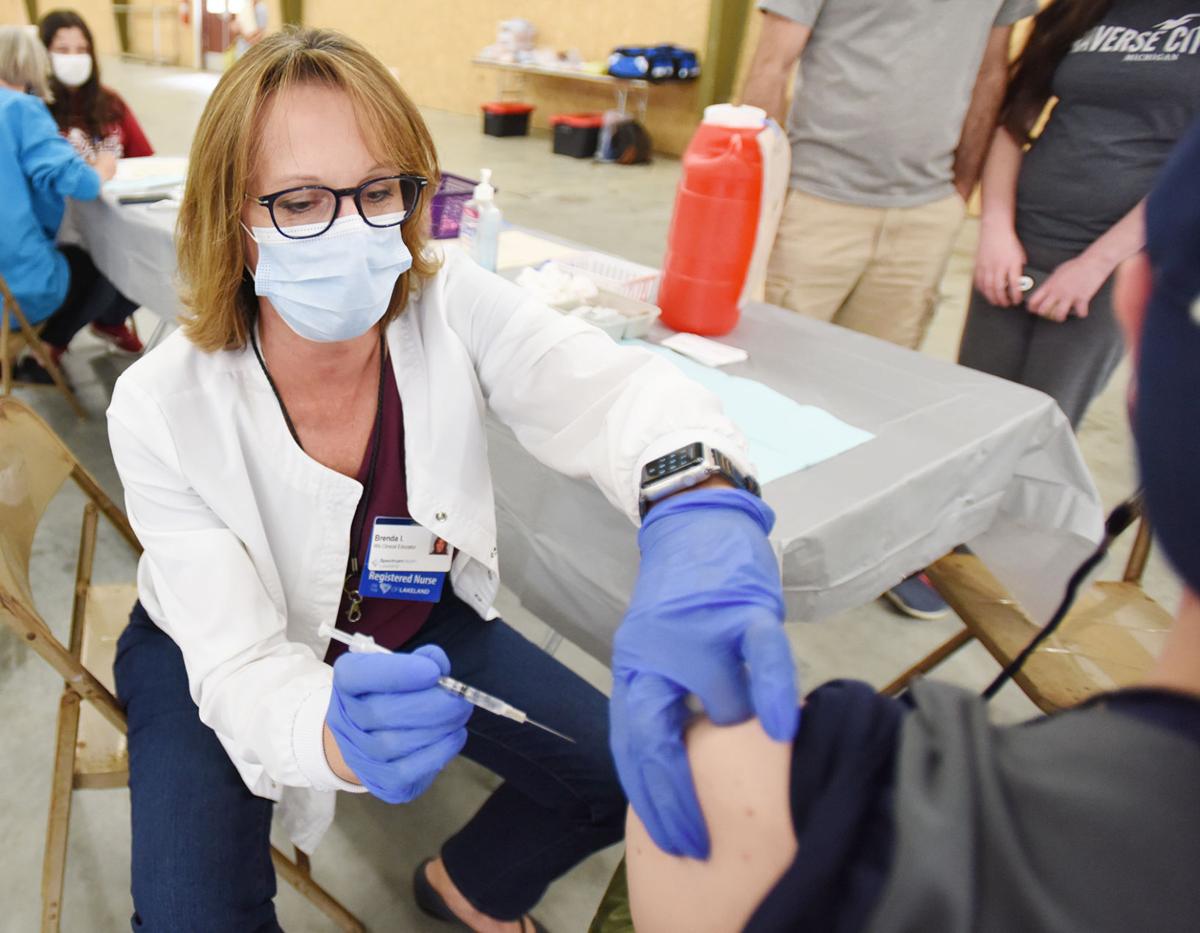 Brenda Ives, a nurse with the Berrien County Health Department, administers a Pfizer vaccine shot to Noah Runyon, 16, during a vaccine clinic in May. 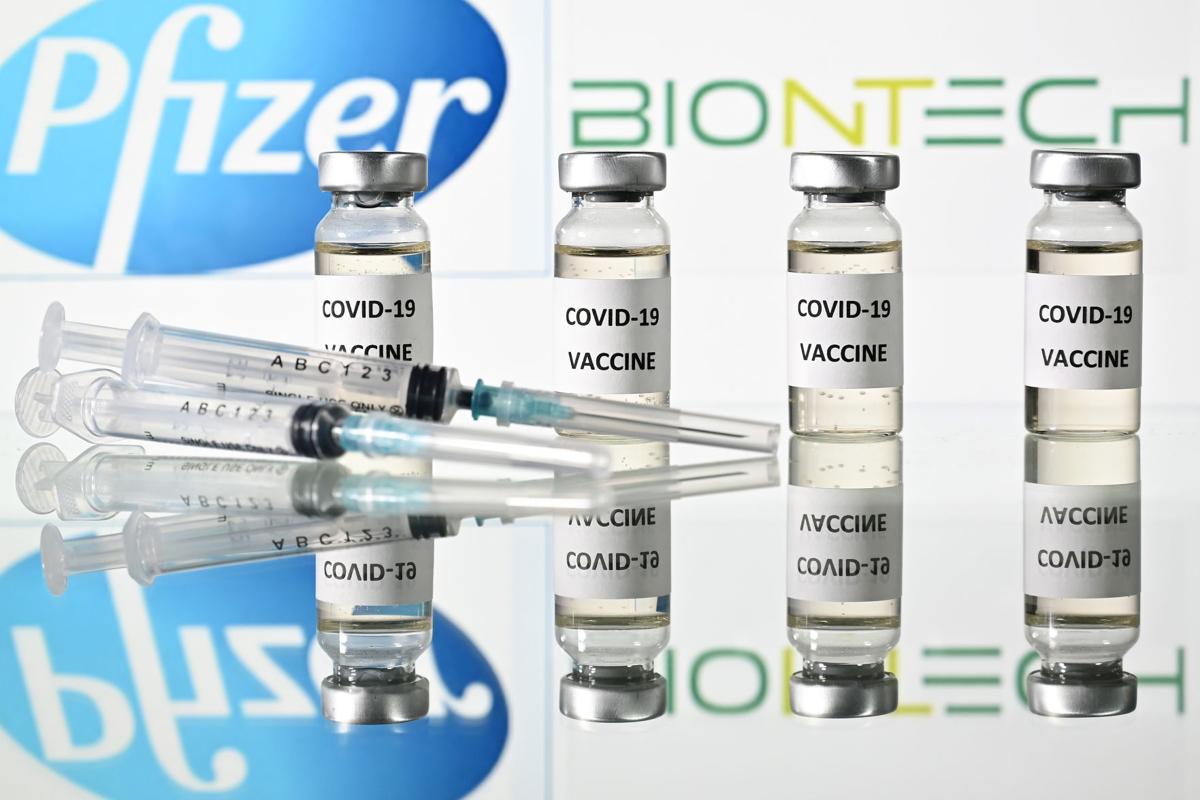 The use of Pfizer's COVID-19 vaccine was expanded to children as young as 12 in May.

The state health department reported 318 new confirmed cases of the coronavirus and eight deaths related to COVID-19 on Friday.

Beginning this week, the Ottawa County Department of Public Health will be discontinuing weekend updates to the Data Hub and reducing update frequency to twice per week — to every Monday and Thursday afternoon. The next report will be made June 14.

Muskegon County added just four confirmed cases of the virus and no deaths related to COVID-19 on Friday, the state health department reported. The county's pandemic total number of confirmed cases is now 16,212, with 365 deaths.

US vaccine surplus grows by the day as expiration dates loom

In Tennessee and North Carolina, demand for the COVID-19 vaccine has slowed down so much that they have given millions of doses back to the federal government, even though less than half of their total populations are vaccinated.

Mississippi, the least vaccinated state in the country, is transferring inventory to Maine, which has one of the highest rates of immunization. Around the country, states are rushing to use up doses before they expire this summer.

The U.S. is confronted with an ever-growing surplus of coronavirus vaccine, looming expiration dates and stubbornly lagging demand at a time when the developing world is clamoring for doses to stem a rise in infections.

Million-dollar prizes, free beer and marijuana, raffled-off hunting rifles and countless other giveaways around the country have failed to significantly move the needle on vaccine hesitancy, raising the specter of new outbreaks.

The stockpiles are becoming more daunting each week. Oklahoma has 800,000 doses on shelves but is administering only 4,500 a day and has 27,000 Pfizer and Moderna doses that are set to expire at the end of the month.

Millions of Johnson & Johnson doses nationwide were set to expire this month before the government extended their dates by six weeks, but some leaders acknowledge it will be difficult to use them up even by then.

"We really cannot let doses expire. That would be would be real outrage, given the need to get vaccines to some under-vaccinated communities in the U.S. and the glaring gap in vaccinations and the inequity of vaccinations that we have globally," said Dr. Kirsten Bibbins-Domingo, chair of epidemiology and biostatistics at the University of California, San Francisco.

The U.S. averaged about 870,000 new injections per day at the end of last week, down sharply from a high of about 3.3 million a day on average in mid-April, according to the Centers for Disease Control and Prevention.

President Joe Biden wants to have 70% of the adult U.S. population at least partially vaccinated by July 4. But the U.S. could well fail to meet that target. As of Friday, 64% of Americans 18 and older had had at least one dose, by the CDC's count.

Some states, especially in the Northeast, have already reached that 70% goal for adults, while places like Mississippi and Alabama are nowhere close.

Amid the glut, the White House has announced plans to share 80 million doses globally by the end of June and also buy 500 million more doses of the Pfizer vaccine and donate them to 92 lower-income countries and the African Union over the next year.

With demand stronger in Maine and Rhode Island, the two states got 32,400 doses from Mississippi, where just 35% of people have had a first dose. Mississippi has returned an additional 800,000 doses to the federal government. The state has seen demand plunge to December levels, with only 14,000 doses administered there this week.

Those skipping the vaccine include Benjamin Schlink of Pearl, Mississippi, who said he believes he is healthy enough to fight the illness.

"The way I look at it, I don't worry about it, because God is in control," he said. "If God wants you to have it, you'll have it."

Gayle Charnley, 69, said some of her neighbors in the small town think she should get the shot, but she is not planning on it. "They're just forcing them on people as fast as they can get them, and we don't know what the long-term effects are going to be," she said.

Hundreds of millions of vaccine doses have been administered around the world with intense safety monitoring, and few serious risks have been identified.

Some of the demand slowdown is a natural part of the rollout process. In Massachusetts, 68% of people have a first dose and the mass vaccination sites are shutting down as officials shift to harder-to-reach places, such as drug treatment centers.

Demand has been especially low for the J&J vaccine, a one-shot, easy-to-store formula that held great promise because of its convenience but whose rollout has been hurt by links to a rare blood clot disorder and contamination problems at a Baltimore factory.

Bibbins-Domingo said that with many parts of the world desperate for doses, the U.S. has a moral obligation not to waste the J&J formula, which is especially useful in remote areas, among people who are homeless and in rural communities.

"At all costs, we need to make sure that those doses get to people who can use them." she said.

In West Virginia, demand has nearly dropped off completely for the J&J vaccine. About 42% of the total population there has gotten at least one dose.

That's in spite of a sweepstakes raffling off everything from cash to hunting rifles to pickup trucks. When Ohio kicked off a trend of million-dollar prize drawings a few weeks ago, officials saw a robust 43% increase in vaccination numbers — but only for the first week.

In North Carolina, $25 cash cards helped bring people to vaccine clinics, but even so, the state isn't ordering any new doses from the government for the second week in a row.

Instead, the state has given back 1.2 million doses. In Tennessee, 2.4 million have been returned to the federal pool. It's a disappointing development to William Schaffner, a professor of preventive medicine at Vanderbilt University's medical school in Nashville.

"If the governor is not making an impassioned plea — and ours hasn't — then I look to local leaders of every kind," he said.

In Colorado, which has given over 175,000 back to the federal pool, there's a million-dollar lottery, and drag queens have begun beckoning people at clinics during Pride Month. In New Mexico, the nation's biggest lottery grand prize, $5 million, halted a downward trend in vaccinations and may have even caused a slight improvement, officials said. Washington state allowed marijuana stores to offer free joints this week.

While incentive programs may not have sent vaccination rates soaring, they are still a worthwhile tool for states working through the difficult "last mile" of a marathon, said Dr. Nirav Shah, head of the Maine Center for Disease Control and Prevention and president of the Association of State and Territorial Health Officers.

About one-quarter of the hundreds of people who responded to North Carolina's cash-card giveaway said it was key to their decision to get the shot that day.

"If states are able to prevent chains of transmission that would have otherwise landed people in the ICU on a ventilator, missing weeks of work, keeping their family out of school, if we can avoid a handful of those incidents, then these programs will have been worth it," Shah said.

Several states aren't ordering new vaccines from the government, including Alabama, Delaware, New Hampshire, New Jersey, Utah, and Oklahoma. Other states, such as Iowa and Nevada, are still ordering new doses but in dramatically reduced amounts.

Still, Shah said the nation's vaccine rollout is moving much more quickly than he expected, and he welcomed efforts to expand distribution to hard-pressed regions like Africa.

"One of the things that the pandemic has illustrated is that we are not safe, as a state, as a country, as a globe, until everywhere is safe," he said. "We should be doing our part to vaccinate everyone in the globe."

Associated Press writers around the country contributed to this report.

Do you celebrate Father’s Day as much as you do Mother’s Day?