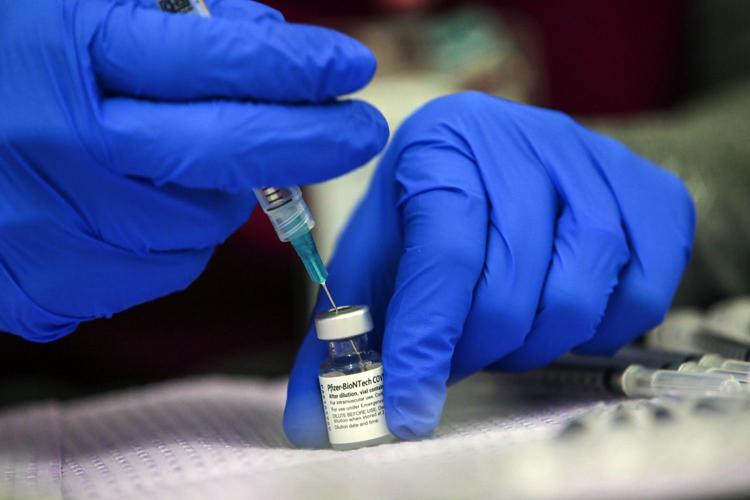 Alma Sevilla preparers a Pfizer COVID-19 vaccine vial at a mobile vaccine clinic in Los Angeles on May 14, 2021.

This chart shows the number of new cases of COVID-19 reported in Ottawa County for each of the past 30 days, as of Dec. 13.

The state health department on Monday reported 16,143 new confirmed cases of the coronavirus in Michigan and 160 deaths related to COVID-19 since Friday's report.

That's 5,381 new cases per day for the three-day period of Saturday, Sunday and Monday.

The Ottawa County Department of Public Health said Monday there were 559 new cases of the virus and two more deaths related to COVID-19 since its Friday update. The county's pandemic total number of cases is now 53,086, with more than 45,000 recovered and 594 deaths.

Ottawa County's seven-day average of new daily cases of COVID-19 was about 198 as of Monday. It was nearly 300 per day a week ago.

Muskegon County added 250 confirmed cases of the virus and five deaths in the past three days, the state health department reported Monday. The county's pandemic total of confirmed cases is now 28,009, with 485 deaths related to COVID-19.

One year of vaccines: Many lives saved, many needlessly lost

One year ago, the biggest vaccination drive in American history began with a flush of excitement in an otherwise gloomy December. Trucks loaded with freezer-packed vials of a COVID-19 vaccine that had proved wildly successful in clinical trials fanned out across the land, bringing shots that many hoped would spell the end of the crisis.

That hasn't happened. A year later, too many Americans remain unvaccinated and too many are dying.

The nation's COVID-19 death toll stands at around 800,000 as the anniversary of the U.S. vaccine rollout arrives. A year ago it stood at 300,000. An untold number of lives, perhaps tens of thousands, have been saved by vaccination. But what might have been a time to celebrate a scientific achievement is fraught with discord and mourning.

National Institutes of Health Director Francis Collins said scientists and health officials may have underestimated how the spread of misinformation could hobble the "astounding achievement" of the vaccines.

"Deaths continue ... most of them unvaccinated, most of the unvaccinated because somebody somewhere fed them information that was categorically wrong and dangerous," Collins said.

Developed and rolled out at blistering speed, the vaccines have proved incredibly safe and highly effective at preventing deaths and hospitalizations. Unvaccinated people have a 14 times higher risk of dying compared to fully vaccinated people, the Centers for Disease Control and Prevention estimated based on available data from September.

Their effectiveness has held up for the most part, allowing schools to reopen, restaurants to welcome diners and families to gather for the holidays. At last count, 95% of Americans 65 and older had had at least one shot.

"In terms of scientific, public health and logistical achievements, this is in the same category as putting a man on the moon," said Dr. David Dowdy, an infectious-disease epidemiologist at Johns Hopkins Bloomberg School of Public Health.

The vaccines' first year has been rocky with the disappointment of breakthrough infections, the political strife over mandates and, now, worries about whether the mutant omicron will evade protection.

Despite all that, Dowdy said, "we're going to look back and say the vaccines were a huge success story."

On the very day that an eager nation began rolling up its sleeves, Dec. 14, 2020, the U.S. death toll from COVID-19 hit 300,000. And deaths were running at an average of more than 2,500 a day and rising fast, worse than what the country witnessed during the harrowing spring of 2020, when New York City was the epicenter of the U.S. outbreak.

By late February total U.S. deaths had crossed 500,000, but the daily death count was plummeting from the horrible heights of early January. With hopes rising in early March, some states began reopening, lifting mask mandates and limits on indoor dining. Former President Donald Trump assured his supporters during a Fox News interview that the vaccine was safe and urged them to get it.

But by June, with the threat from COVID-19 seemingly fading, demand for vaccines had slipped and states and companies had turned to incentives to try to restore interest in vaccination.

It was too little, too late. Delta, a highly contagious mutated form of coronavirus, had silently arrived and had begun to spread quickly, finding plenty of unvaccinated victims.

"You have to be almost perfect almost all the time to beat this virus," said Andrew Noymer, a public health professor at the University of California, Irvine. "The vaccine alone is not causing the pandemic to crash back to Earth."

One of the great missed opportunities of the COVID-19 pandemic is the shunning of vaccination by many Americans.

This fall, Rachel McKibbens, 45, lost her father and brother to COVID-19. Both had refused the protection of vaccination because they believed false conspiracy theories that the shots contained poison.

"What an embarrassment of a tragedy," McKibbens said. "It didn't have to be this way."

More than 228,500 Americans have died from COVID-19 since April 19, the date when all U.S. adults were eligible to be vaccinated. That's about 29% of the count since the first U.S. coronavirus deaths were recorded in February 2020, according to an Associated Press analysis.

Red states were more likely than blue states to have greater than average death tolls since then.

"I see the U.S. as being in camps," Noymer said. "The vaccines have become a litmus test for trust in government."

There are exceptions: Notably, Hawaii and Oregon are the only Joe Biden-supporting states where more than half of the COVID-19 deaths came after shots were thrown open to all adults. North Dakota and South Dakota — both ardent Trump states — have kept their share of deaths after the vaccine became available across the board to under 25%.

California has seen more than 15,000 COVID-19 deaths since the state opened eligibility to all adults in mid-April. McKibbens' father and brother died in Santa Ana, California, in their shared home.

McKibbens pieced together what happened from text messages on her brother's phone. Some of the texts she read after his death, including back-and-forth messages with a cousin who cited TikTok as the source of bad advice.

"My brother did not seek medical attention for my dad," keeping him lying on his back, even as his breathing began to sound like a broken-down motor, said McKibbens, who lives across the country in Rochester, New York.

Her father, Pete Camacho, died Oct. 22 at age 67. McKibbens flew to California to help with arrangements.

Her brother was sick, too, but "he refused to let me into the house because he said I shed coronavirus because I was vaccinated," McKibbens recalled. "It was a strange new belief I had never heard before."

A friend found her brother's body after noticing food deliveries untouched on the porch. Peter Camacho, named for his father, died Nov. 8 at age 44.

"For me to have lost two-thirds of my family, it just levels you," McKibbens said.

Rodriguez had tried to get vaccinated weeks earlier but was told at a pharmacy she needed authorization from her doctor. "She never returned," said her sister, Tanya Alves of Weston, Florida.

Six days after testing positive, Rodriguez had to have a breathing tube inserted down her throat at a hospital near her home in San Juan, Puerto Rico. Her baby girl was delivered by emergency cesarean section Aug. 16.

The young mother never held her child. Rodriguez died Oct. 30 at age 24. She left behind her husband, two other children and an extended family.

"Her children ask for her constantly," Alves said. "I literally feel like a piece of me has been ripped out of me and even those words aren't enough to describe it."

She urges others to get vaccinated: "If you would know the terror of being hospitalized or having a loved one there ... if people would know, they would be afraid of this instead of fearing the vaccine."

Are you concerned or worried that COVID-19 may be rearing its ugly head again?