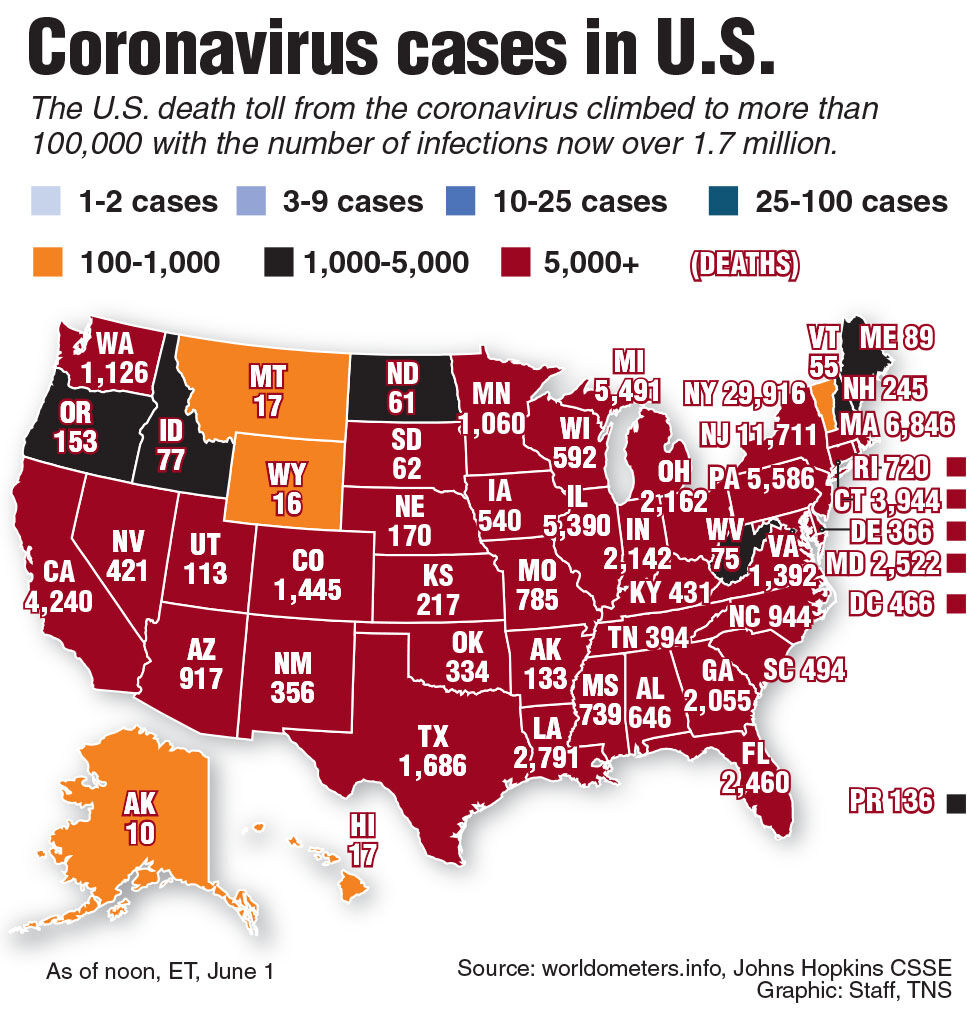 Map shows the U.S. states that have the coronavirus and deaths, as of June 1. 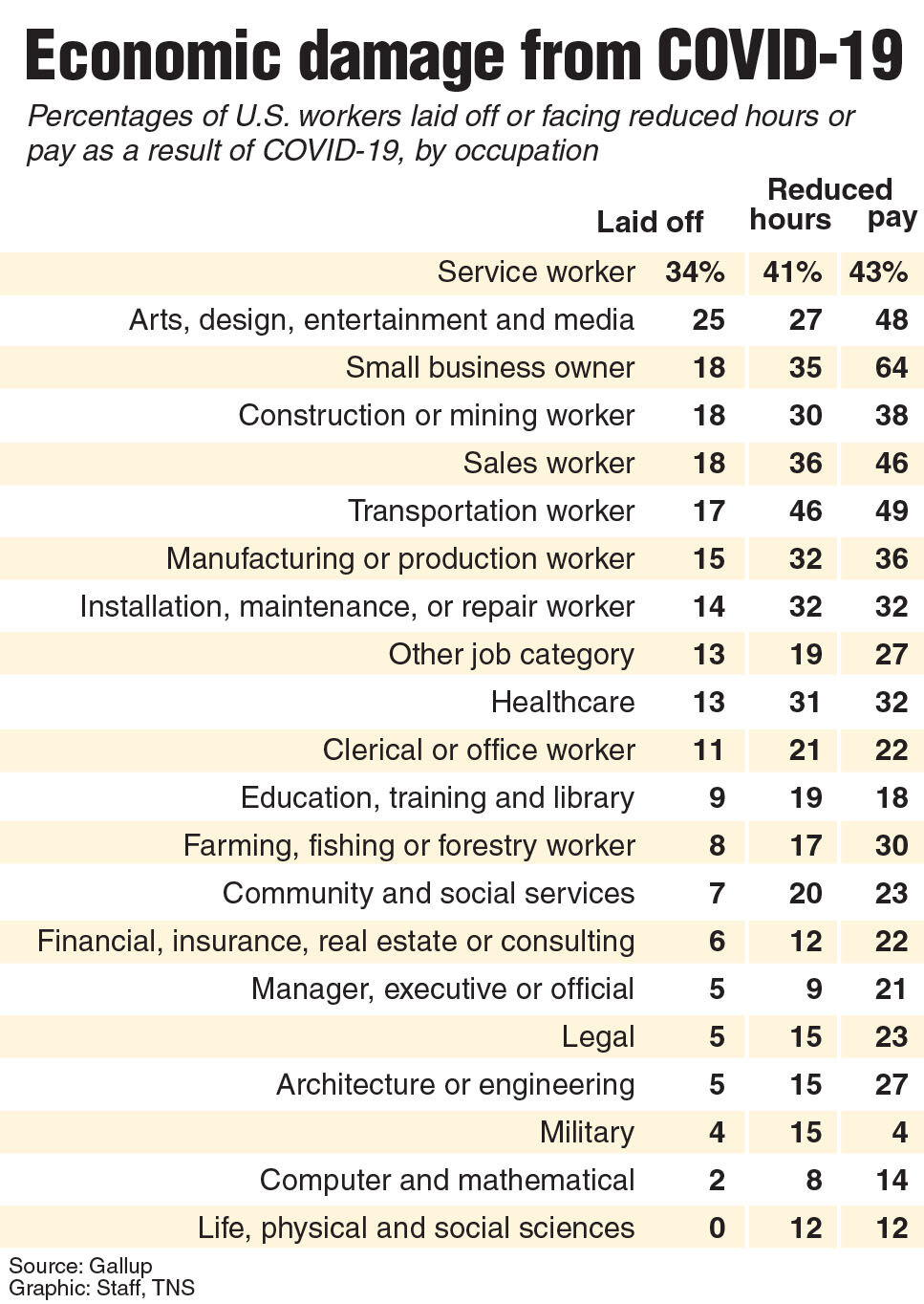 The state health department reported 199 new confirmed cases of the coronavirus in Michigan and 37 additional deaths on Tuesday.

The death toll in Tuesday's report includes 11 that were identified through a Vital Records review.

There were no new lab-confirmed cases of the virus in Ottawa County on Tuesday, the local health department reported. The Department of Public Health reported one additional death related to COVID-19 on Tuesday.

Since her last Facebook Live report a week ago, Ottawa County health department spokeswoman Kristina Wieghmink said Tuesday there have been four additional deaths in the county: a woman in her 70s, a woman in her 80s and two men in their 80s. All had underlying health conditions, Wieghmink said.

Muskegon County added just three new confirmed cases and one death on Tuesday. The county now has 648 cases and 37 deaths, according to the state health department.

The Ottawa County health department will be hosting a free community coronavirus testing event this coming weekend at West Ottawa High School. The test site will be open from 8:30 a.m. to 3:30 p.m. Saturday and 11 a.m. to 5 p.m. Sunday. Wieghmink said you don't have to have symptoms to be tested at this event.

The governor moved regions comprising 93 percent of the state's population to phase 4 — "improving" — two weeks after she announced that northern Michigan could advance to that stage. Businesses where close contact is necessary, such as gyms, hair salons, theaters and amusement parks, will remain closed under a new order.

Retailers can reopen to customers without an appointment on Thursday and restaurants can offer dine-in service on June 8, with capacity limits. Children's day camps, pools, libraries and museums can also reopen June 8. Groups of up to 100 can gather outside if they stay 6 feet apart, up from a threshold of 10 people. In-home services such as housecleaning can resume.

Whitmer said her goal is to shift the state to phase 5 — "containing" — before July 4, so businesses such as barbershops, indoor gyms, theaters and overnight camps can open. She plans later this week to let the Upper Peninsula and Traverse City regions, where COVID-19 cases and deaths have been low, proceed to stage 5. Phase 6 is "post-pandemic."

"We're taking a big step forward today. It's undeniable," said the Democratic governor, whose restrictions have been unsuccessfully challenged in court by Republican lawmakers and others. "We've gone from a moment where we've said, 'Everyone needs to stay home except for these essential things' to now, 'It's OK to re-engage except for a few of these things that still are too risky.'"

Dr. Joneigh Khaldun, the state's chief medical executive, said Monday that the number of people sickened by the virus continues to rise at a slower rate, and hospitals have capacity. She cautioned that just one person can infect many.

"It's incredibly important that as businesses open up they do so in the safest way possible, following the safety protocols and guidance put forth by public health officials," Khaldun said.

For most people, the new coronavirus causes mild or moderate symptoms, such as fever and cough that clear up in 2-3 weeks. For some, especially older adults and people with existing health problems, it can cause more severe illness, including pneumonia, and death.

Also Monday, the Whitmer administration announced that can and bottle returns can resume starting June 15.

Voters are navigating curfews, health concerns and a sharp increase in mail balloting on Tuesday as elections take place from Maryland to Montana.

Four states were originally scheduled to vote in April but delayed their contests because of the coronavirus outbreak. Pennsylvania offers the day's biggest trove of delegates and represents a high-profile test case for Republicans and Democrats working to strengthen their operations in one of the most important general election battlegrounds.

"We think we're prepared," Pennsylvania Democratic Party Chairwoman Nancy Patton Mills said. "Thank goodness we have the opportunity of working this out in the primary because we don't know where we'll be with the pandemic in November."

Joe Biden was in Philadelphia on Tuesday morning to deliver remarks about the civil unrest that has erupted across the nation after the police killing of George Floyd. He didn't talk about the primary, instead focusing his attention on President Donald Trump, whom Biden blasted as "more interested in power than in principle."

Biden is already the presumptive Democratic presidential nominee and needs to win 89 percent of all delegates at stake on Tuesday to formally clinch the nomination. With a dominant showing on Super Tuesday in early March, the former vice president pushed out all his major opponents. He will almost certainly secure the needed delegates later in the month, if necessary.

Vermont Sen. Bernie Sanders is not actively campaigning, having suspended his operation and endorsed Biden, but his name will appear on the ballots. On the eve of Tuesday's primaries, senior adviser Jeff Weaver encouraged progressives to vote for Sanders anyway.

"People who support Bernie Sanders and his agenda, who want to maximize the influence of progressives at the convention, should cast their vote for Bernie Sanders," Weaver said, reminding voters that the Vermont senator is seeking leverage to shape the party's platform and rules.

The comments serve as a reminder that Biden may have no legitimate Democratic rivals remaining but must still win over skeptical activists from his party's far-left flank, who worry he's too close to the political establishment.

Party unity will likely be an afterthought this week, however, as more immediate health and safety concerns dominate the national conversation. The coronavirus death toll has surged past 100,000 nationwide, and thousands of new cases are reported each day.

At the same time, several major cities, including some voting Tuesday, are grappling with protests.

Some voters said Trump's increasingly tough tone toward protesters inspired them to participate in the democratic process. Nicholas Autiello, who works in finance in Rhode Island, said he was disturbed by police driving back peaceful demonstrators near the White House on Monday.

"Last night, we have a president who is acting like a dictator," Autiello said. "So being able to come out here this morning and fill in a circle next to a name for someone who I know will restore honor and decency to the presidency was so important."

Washington, D.C., Mayor Muriel Bowser ordered a 7 p.m. curfew on Tuesday, though voting places will be open until 8 p.m. Voting has been deemed essential, and city officials say voters will not be subject to arrest if they cast ballots during the curfew. Philadelphia moved its 6 p.m. curfew back to 8:30 p.m. for Tuesday to accommodate voting.

"We are in unique times, and voting is a unique challenge for people," said Josh Schwerin, chief strategist for the pro-Democrat super PAC Priorities USA. He said that his organization and others will be watching closely on Tuesday "to see how well it works, where issues are and where obstacles have been put in place."

Political groups have had to adjust as some states move to a system that relies largely on voting by mail. They include Montana, where all 56 counties decided to vote entirely by mail. Voting rights watchdogs in multiple states have expressed concerns about access to mail ballots, confusion about deadlines and a shortage of poll workers that could lead to long lines.

Those voting Tuesday include the District of Columbia, Idaho, Indiana, Maryland, Montana, New Mexico, Pennsylvania, Rhode Island and South Dakota. Another state holding primary elections, Iowa, chose its presidential nominee early in the year and focused on other offices.

Have you voted yet in the upcoming primary elections?