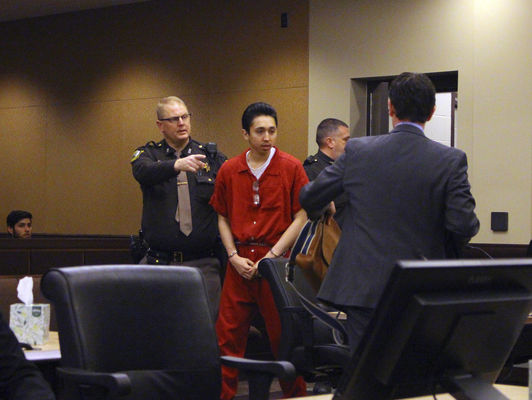 Holland Sentinel photo/Audra GambleJuan Sandro Cabrera, 19, is led by deputies to his sentencing in Ottawa County Circuit Court in Grand Haven on Monday. He was sentenced to life in prison without the possibility of parole for murdering 14-year-old T.J. Wells in February 2019. 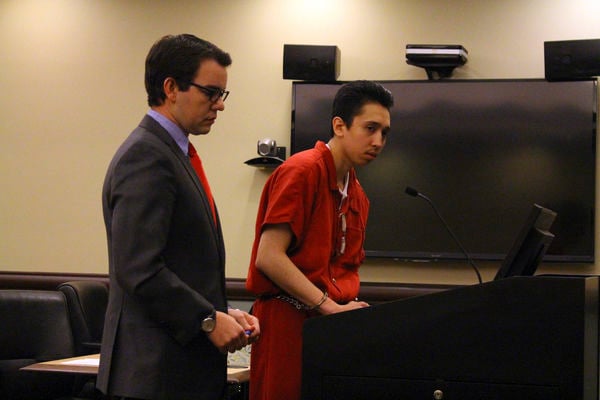 Holland Sentinel photo/Audra GambleJuan Sandro Cabrera, 19, is led by deputies to his sentencing in Ottawa County Circuit Court in Grand Haven on Monday. He was sentenced to life in prison without the possibility of parole for murdering 14-year-old T.J. Wells in February 2019.

Holland resident Juan Sandro Cabrera, 19, was sentenced to life in prison on Monday for the murder of Troy “T.J.” Wells.

Cabrera was convicted by a jury of first-degree premeditated murder in October 2019, following a five-day trial. The jury convicted Cabrera of the murder charge and a felony firearms charge, along with gang membership or affiliation with the Holland Latin Kings. The jury deliberated for two hours before reaching its decision.

The sentence for first-degree murder is mandatory life in prison without the possibility of parole.

Wells was shot and killed with a high-powered rifle at the Hampton Inn hotel off Felch Street in Holland Township shortly after midnight on Feb. 16, 2019.

“What you did was a very cowardly act,” said Roychelle Norris, Wells’ aunt. “My nephew is gone and he’s never coming back, and you still get to live. I don’t think it’s fair that your mom gets to visit you in your cell and my sister has to visit her son in a grave. I don’t think there’s a sentence, whatever they give you, (that would be) the same amount of pain you caused us. My nephew isn’t breathing no more, and I feel neither should you.”

Wells’ sister, Kari Hunter, wrote a statement read to the court by Da’Jae Brown. Hunter wrote that Cabrera’s killing of her brother made her “evil.”

“To Juan, I hate you like I knew you, like I expected better of you but you broke my heart,” she wrote. “When I found out you got caught, I was disappointed because I would have paid anything to see if you would even stomach one of the shells you hit T.J. with.”

Hunter ended her statement by saying “King killer ’til I die, I’m always dropping the crown,” referencing a way to disrespect members of the Holland Latin Kings.

Cabrera looked directly at the victim’s family members, but did not show outward emotion during their statements.

Judge Karen Miedema sentenced Cabrera to two years for the felony firearms charge, 8-20 years for the gang membership charge and life without the possibility of parole on the murder charge. He was given credit for 312 days served in jail on the firearms and gang charges. The firearms sentence must be completed before the murder sentence begins.

Cabrera must also pay a little more than $4,800 in restitution to the Hampton Inn for damages at the hotel.

“The victim was only 14 years of age — you are an adult," Miedema said to Cabrera. "The victim was a little kid trying to be tough, but he for sure did not have to get killed. There was no need for you to use a weapon of the caliber that you did to shoot T.J. Wells.”

Cabrera’s family — who believes he is innocent and that another person in the hotel that night, Julio Palomares, shot Wells instead — said they will appeal the case “all the way to the Supreme Court."

“This isn’t justice. He didn’t do it,” said Cabrera’s mother, Sarah Cintron. “There’s no king killer, GD killer, any of that type of stuff. If we have not learned from this situation that violence is not the right way to go about it, you’re just going to keep losing people. I lost my son, too. It may not be the same way, but I lost him. And to threaten my or my other family, how is that going to help anything? We need to join and stop the violence, not keep going with it.”

Cintron, who served 60 days in the Ottawa County Jail for lying to police during the felony investigation of her son and harboring a felon, said her family has been threatened repeatedly, including threats to cut her other children’s toes and fingers off.

After Miedema announced Cabrera’s sentence, shouts erupted in the gallery of the courtroom. Someone from Cabrera’s family said, “They got the wrong guy,” to which several members of Wells’ family responded. Families were escorted out of the courtroom by deputies.

Cabrera has 42 days to file an appeal of his conviction and sentence.

Don't ya love how the guy's attorney can stand there and advocate for a client whom he knows is guilty? I bet on his ride home he laughs out loud to himself.