If you need to purchase a subscription.
You are the owner of this article.
Edit Article Add New Article
Home
Obituaries
Classifieds
Entertainment
Lifestyles
News
Police/Fire
Opinion
Sports
Photo Galleries
Share This
1 of 14 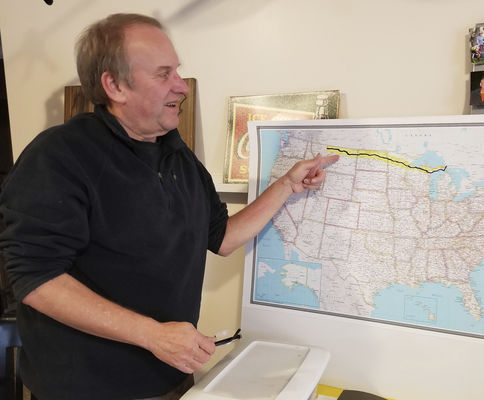 Grand Haven resident Dirk Wierenga points out the route he is covering over a 10-month period for a documentary called “Route 2 Elsewhere.” 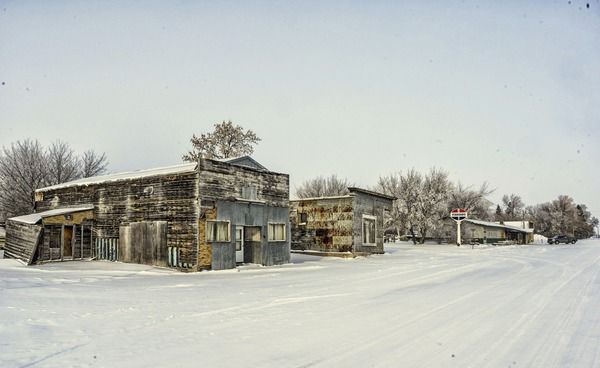 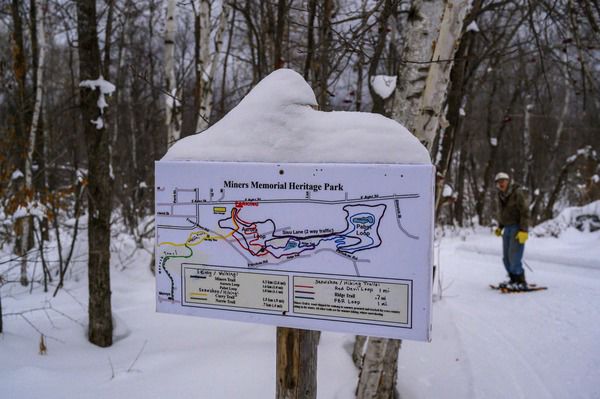 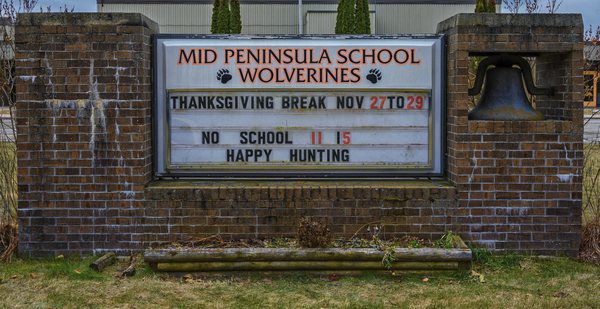 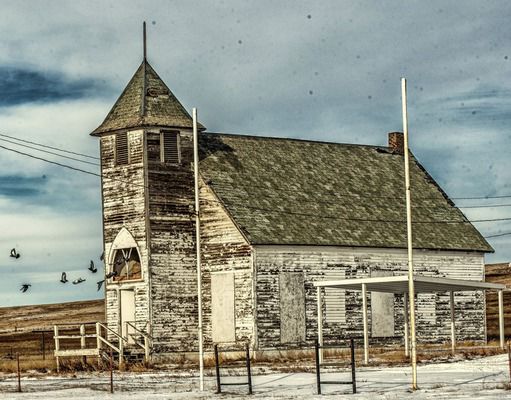 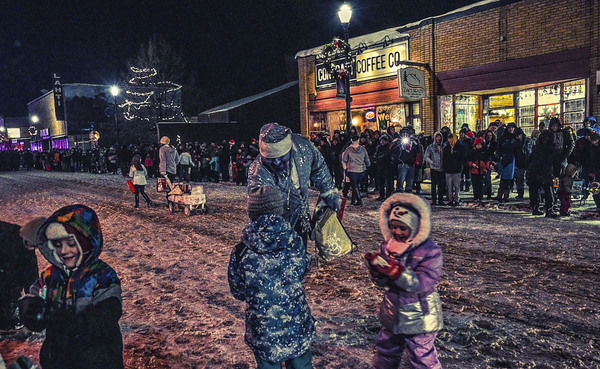 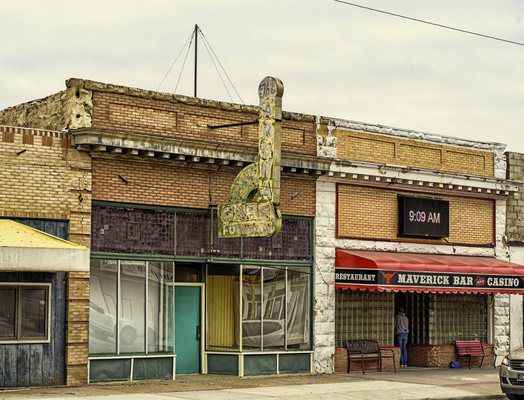 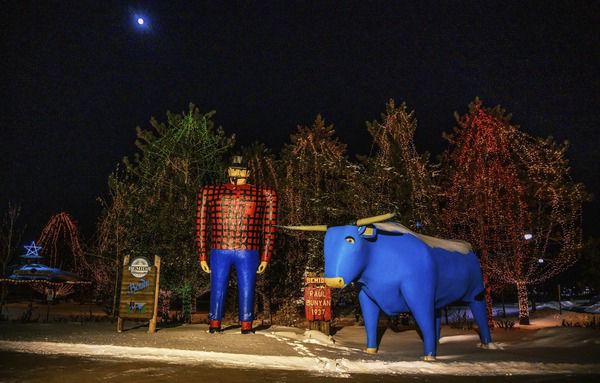 A statue of Paul Bunyan in Bemidji, Minnesota. 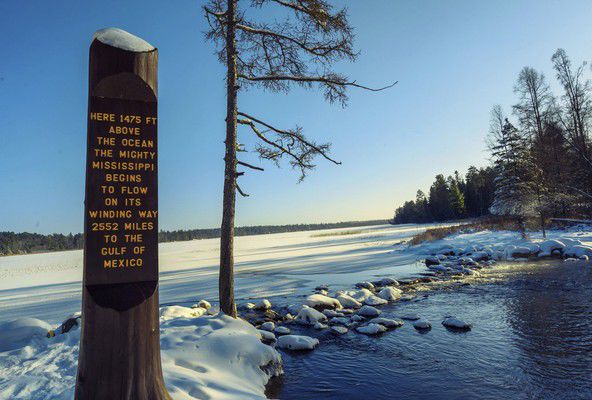 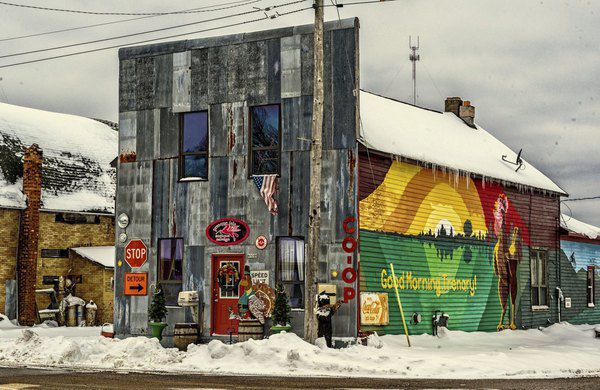 A store in Trenary, in Michigan’s Upper Peninsula. 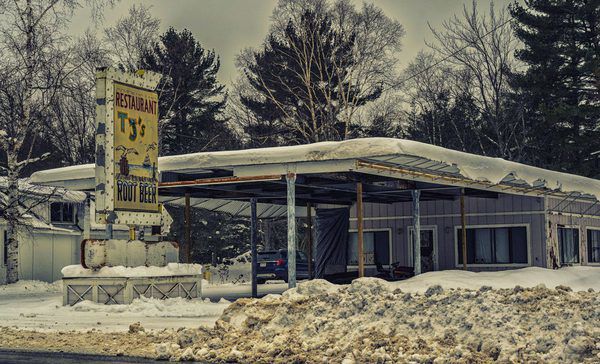 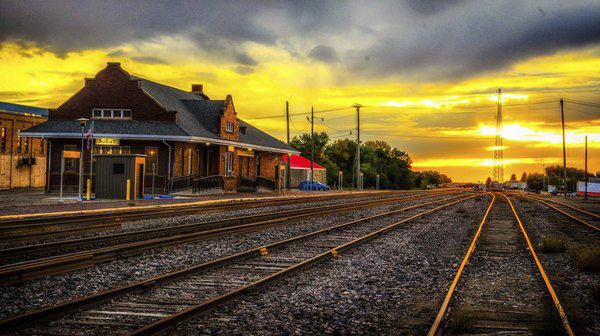 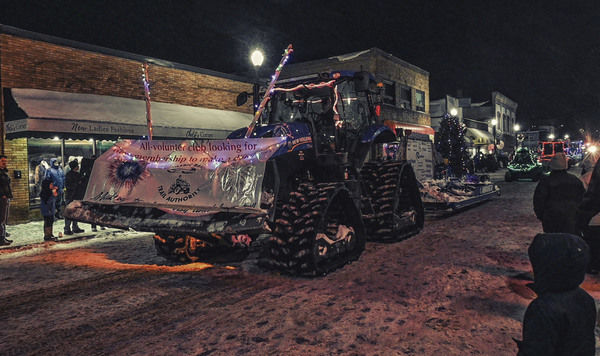 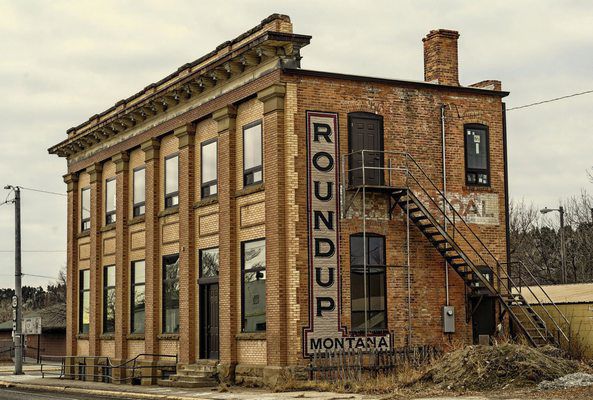 Grand Haven resident Dirk Wierenga points out the route he is covering over a 10-month period for a documentary called “Route 2 Elsewhere.”

A statue of Paul Bunyan in Bemidji, Minnesota.

A store in Trenary, in Michigan’s Upper Peninsula.

The Grand Haven man is sharing his journey with friends who like his Facebook page, “Route 2 Elsewhere.”

Smaller communities are scattered along the route, and Wierenga planned his June 2019 through February 2020 journey in such a way to capture the people in the communities and in the more rural or desolate areas in all seasons.

“It’s probably the longest fully rural area in the country,” he said.

Even the largest city, Duluth, is stretched out along 30 miles of Lake Superior and is not very wide, he said.

Wierenga has traveled along U.S. 2 a lot over the years while working on other projects and developed an interest in getting to know the people who, in some cases, just survive in areas along and off the “Route 2 Elsewhere.” He has 270,000 miles on his 2010 Toyota Prius from his travels across the United States over the years. Those travels have allowed him to see things through a lot of different eyes.

“I know that one of the biggest challenges in the country is how to bring development to rural areas,” Wierenga said. He hopes he can contribute to a possible solution.

So, just what is a rural area, Wierenga asks? Urban areas are easily identified, he says. So are suburban areas. That’s what Grand Haven is, he said, calling it more of a bedroom community.

But there’s no real definition of rural.

“Rural is misunderstood,” Wierenga said. “The feds say, ‘What’s not urban is rural.’ But we live in an urban, suburban, light rural and real rural world.”

Wierenga describes real rural as locations where you don’t have good access to life essentials such as health care, schools and jobs.

Rural areas used to survive off travelers who now fly or use highway bypasses to get to their destinations faster. Because of this, people don’t have a good understanding of the rural population, the filmmaker said.

“U.S. 2 is very accessible,” Wierenga said. “It also tells wonderful stories of boom and bust in the U.S.”

For example, the town of Seney in Michigan’s Upper Peninsula had more than 1,000 residents and 30 bars during the logging boom.

“They over-lumbered it,” he said.

As you get farther west, thousands of people were employed in iron mines before the companies pulled up stakes and left. Then you had the copper mines.

Once you get into the Plains, you reach agricultural lands.

“Because of agri-business, we now have one person on a huge farm where we used to have 3-4 people on each smaller farm,” Wierenga said.

A community of 500 now goes down to 200. The schools are underpopulated, grocery stores close and services leave.

Farther west, you have several rounds of boom and bust in an area like Williston, North Dakota, near the Bakken Formation. This is the second-largest reserve of oil in the country, Wierenga said. Fracking is taking place there and people from Michigan actually drive there to work.

The Bakken was discovered in 1951, but workers could only drill down to the first layer and that oil boom soon went bust. As technology advanced, there was another mini boom in the mid-1970s during the Mideast oil crisis. In 2008, fracking was developed, allowing for deeper penetration into the ground to access the oil.

There are thousands of oil rigs in that area now, Wierenga said. That’s why the population in Williston is rising.

Traveling into Montana, Wierenga said 120 miles of U.S. 2 is inside the Fort Peck Indian Reservation. There, it’s “all bust,” he said.

Then you get into ranching country. It’s a very arid area with low yield.

“That’s an area that’s been challenged forever,” he said.

Wierenga talks about how towns built up during the homesteading times up through the 1920s. Scandinavians were recruited and promised farms of 160 acres. When the new residents couldn’t make life work on the arid lands, they sold out and left, leaving the population sparse again.

Wierenga is interviewing people along the route, getting stories about the challenges and joys of living in rural America. He said by openly sharing everything about his trip on social media, “people are vicariously living a travel adventure.” It also leads him to tips on more places to visit and more potential interviews.

As of early January, Wierenga said he has taped 60-70 long interviews.

In the end, he will use about a half-dozen cases in the documentary. One might be the people at Nature’s Kennel, located about 8 miles north of McMillan off M-28, Wierenga said. Another one might be the man who left a successful business in Arizona to take over the family hardware/lumber business in Chester, Montana.

Although there’s a lot of talk about the struggles, Wierenga said he sees the beauty of the rural lifestyle and why people leave larger towns for it.

Wierenga suggests that communities and states should think more along horizontal lines to look for solutions to economic problems.

Wierenga said that he is learning an incredible amount from people along the 1,500-mile route: how to be civil, how to be a good neighbor and how to be trusting.

“Everyone is nice,” he said. “They get tougher as you go west. They have to be.”

Wierenga and his publisher/producer are self-funding the project.

“You typically don’t sell it until it’s 90 percent done,” he said. “I hope it gets noticed by PBS.”

Wierenga said he expects a minimum six months of post-production before the documentary will be ready for viewing.

The documentary will be entered into film festivals and there will be premiere showings at theaters along the route, he said, as well as locally at one of the libraries.

The documentary is being done in conjunction with Principia Media of Grand Rapids.