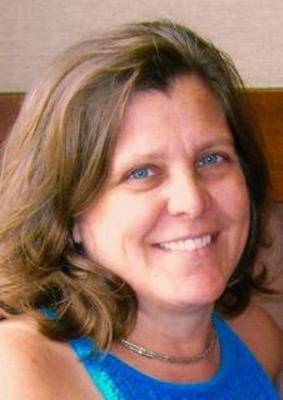 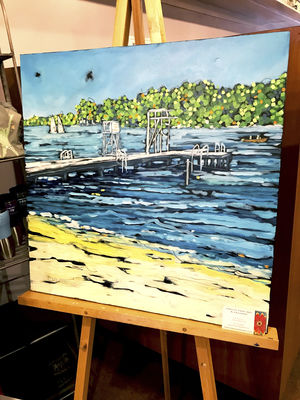 Courtesy photoFormer Spring Lake resident David Trimble purchased this Christi Dreese painting of Lakeside Beach in honor of his wife, Kristie, who died in 2016. The proceeds will go toward Spring Lake Village's Art in the Park project. The painting will be displayed at the Spring Lake District Library.

Courtesy photoFormer Spring Lake resident David Trimble purchased this Christi Dreese painting of Lakeside Beach in honor of his wife, Kristie, who died in 2016. The proceeds will go toward Spring Lake Village's Art in the Park project. The painting will be displayed at the Spring Lake District Library.

Spring Lake artist Christi Dreese created a painting of Lakeside Beach as part of a fundraiser for Spring Lake Village's Art in the Park project, which aims to put public art on display along the Lakeside Trail Bike Path.

During a recent online public auction, former Spring Lake resident David Trimble purchased the painting for $750. He then donated it to the Spring Lake District Library so it could be enjoyed by community members.

“That $750 that David paid was received by the Art in the Park project fundraising campaign,” Stanford-Butler said. “All of the funds received are being put to use to introduce public art to the Village of Spring Lake by painting murals on Spring Lake business buildings that face our multi-user trails.”

Trimble grew up in Spring Lake and he and his wife, Kristie, vacationed here from their Florida residence.

“When Kristie Trimble got sick and knew that she was going to pass away, she asked David to bring her back here to Spring Lake to be laid to rest,” Stanford-Butler said. “David had wanted to support the Art in the Park project, and when he saw Christi's painting, he thought of Kristie and thought she would have loved it.”

Trimble purchased the painting online, but pondered its highest and best use.

“He would have taken it back to Florida with him, but felt that it would be best if it stayed in the community since it was a contribution made to bring public art to Spring Lake,” Stanford-Butler said. “David was in the library during one of his more recent trips home and as he walked through the building, he came across a blank spot on the wall and immediately made an appointment to meet with Maggie McKeithan, the new library director.”

“We were married 42 years, have three grown children and three grandchildren,” David Trimble said. “Kristie was born in Lansing, lived 42 years in Florida and she chose to be interred in Spring Lake. She loved Spring Lake and hoped we would purchase a summer home here.”

Trimble was born in Grand Haven and lived in Spring Lake until he was 21.

Trimble said he purchased the painting because it captures the spirit of innocence and quaintness of growing up in Spring Lake.

“Our family and most who grew up here, learned to swim and continued to gather there every summer,” he said. “Lakeside was ours. Memories were born there that will never be forgotten.”

Stanford-Butler deemed it a “win-win” for the Trimble family, Village residents, the Spring Lake District Library and the Art in the Park project.

“Christi's painting is now on display at the Spring Lake District Library as a tribute to Kristie Trimble,” Stanford-Butler said.

Dreese drew her inspiration from a 1950s-era photo of Lakeside Beach. It's a nostalgic piece representing days gone by.

“So many of the people who have seen this painting love that it brings back the memories they have of learning to swim at Lakeside Beach and of simpler times,” Stanford-Butler said. “Today, when the water levels are so high, the beach, too, is a thing of the past. It's nice to be able to see it as it used to be.”

What will it take to end the pandemic and get us back to "normal"?