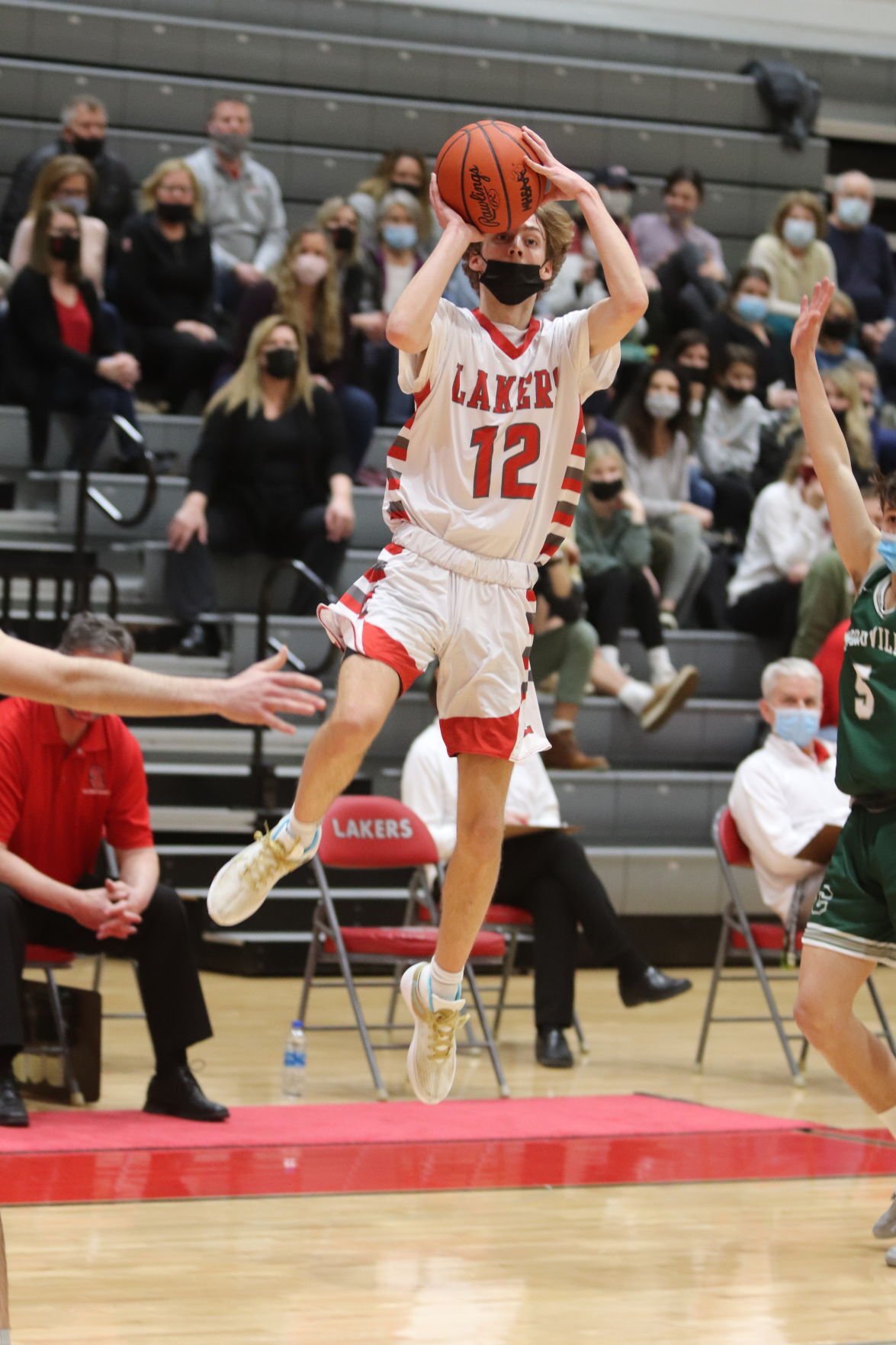 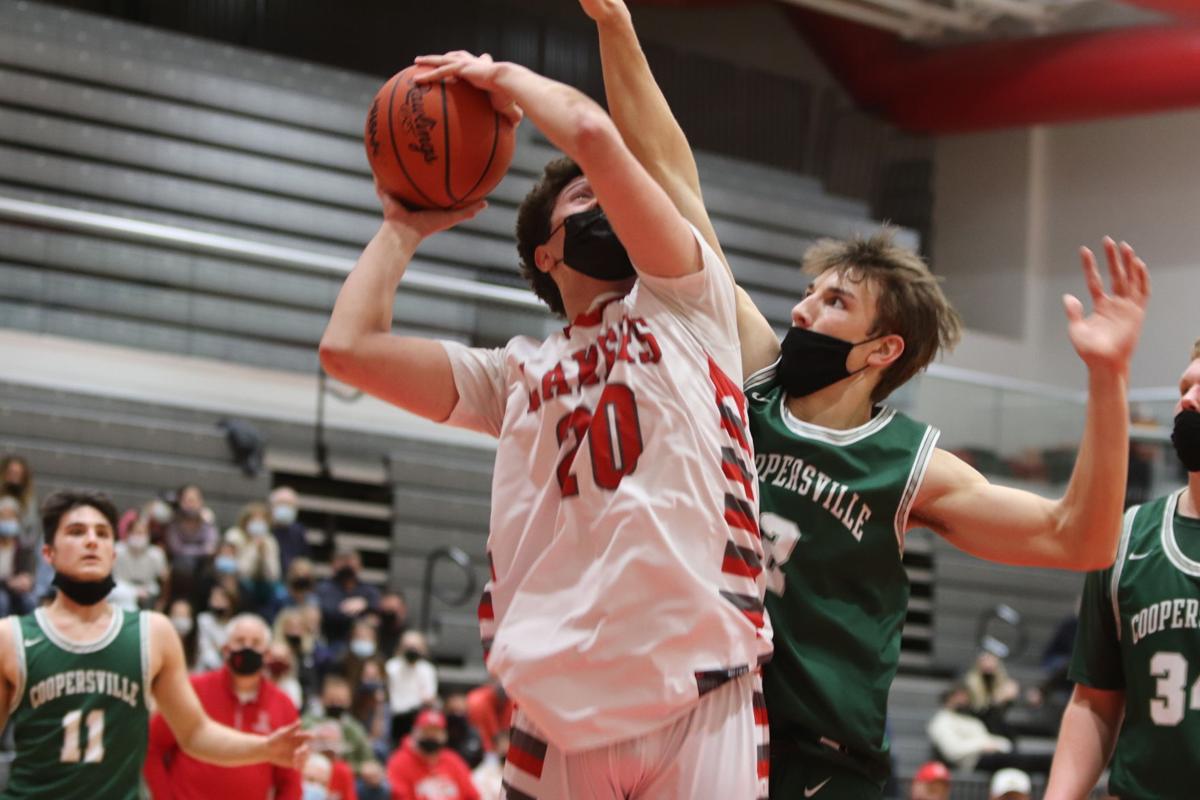 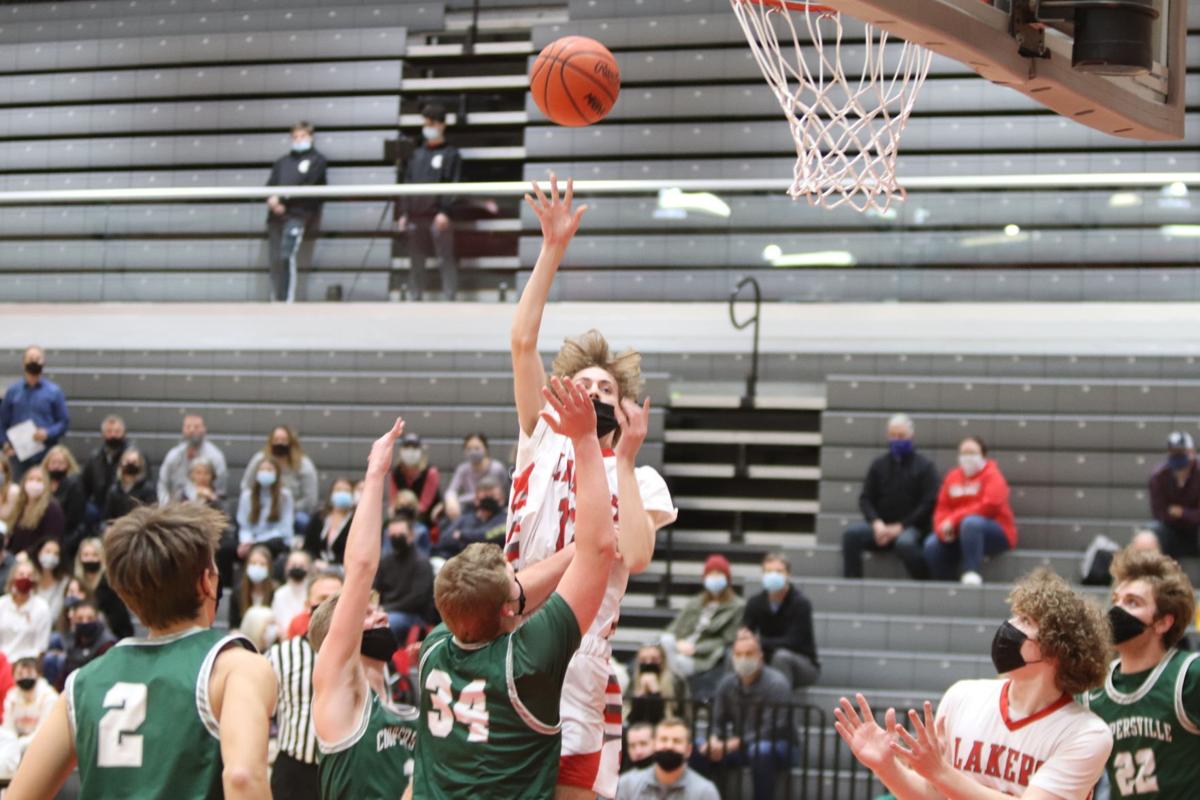 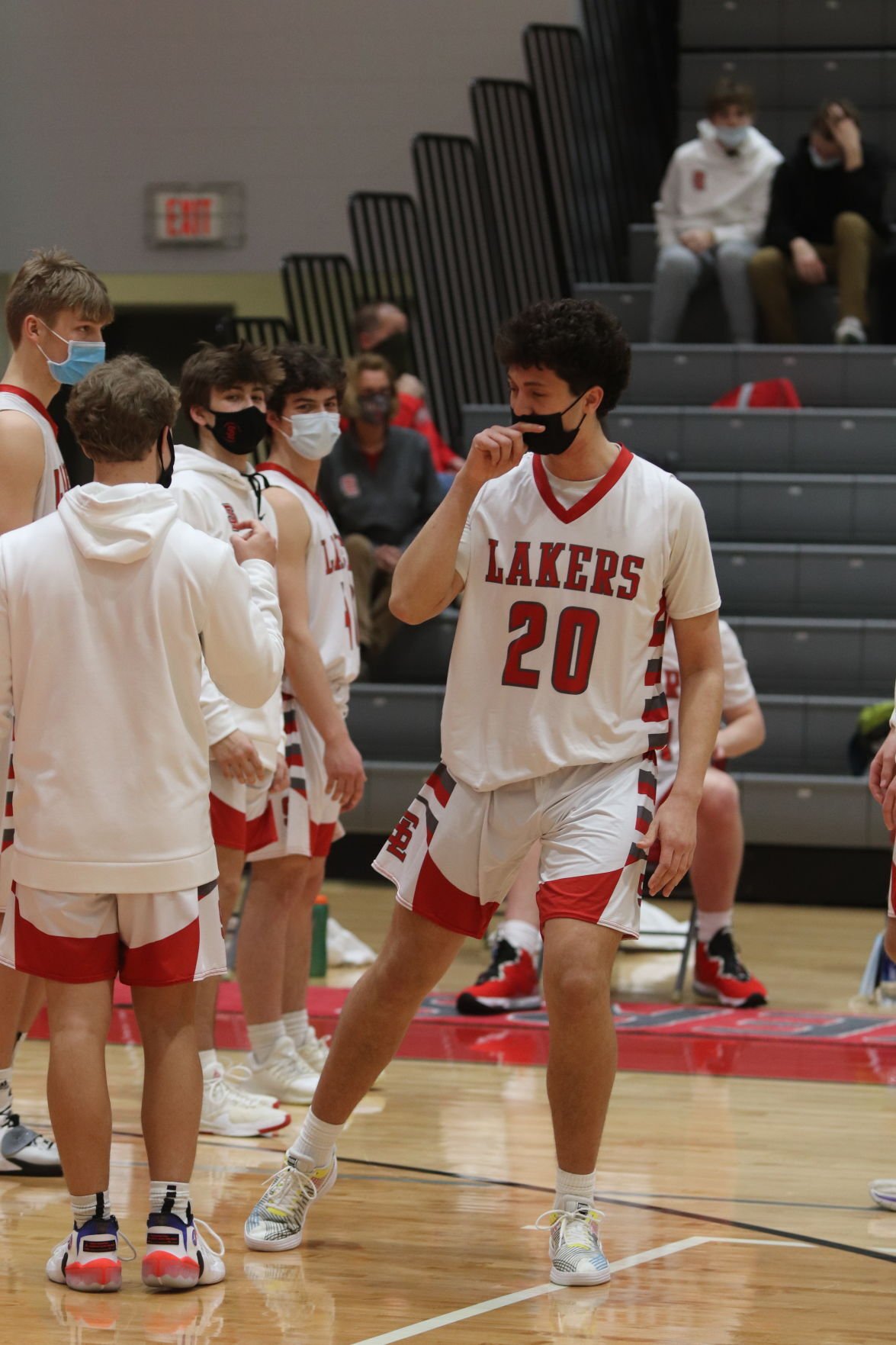 SPRING LAKE TWP. – Before Spring Lake’s matchup against Coopersville on Friday night, coach Bill Core had a message for his team. He’s an old school coach and demonstrated a business-like approach to his team.

“We don’t do wristbands and headbands or sleeves,” Core said. “I think that when you have a business approach, you don’t necessarily have the highs and the lows effect you as much.”

Coopersville, arguably the polar opposite, is one of the more animated teams in the OK Blue conference. The Lakers’ approach and their stifling defense held the explosive Broncos to just 21 points at the half.

That struggle, along with the Broncos eventually using a 49-point second half eruption, closed the door on the Lakers as they fell 70-44. Core noted that Coopersville can flip a switch and go on spurts that are difficult to withstand.

Spring Lake struck first with a triple from Kaden George in the first quarter, but only managed a Porter Saunders put back after that and trailed 11-5 after one. Because Coopersville’s 2-3 zone was so spread out, Core and his team emphasized flashing the high post. The first player to flash was senior forward Jaron Little as he scored two elbow jumpers in the second quarter.

“It was open, and my parents told me this week to start flashing more,” Little said.

Senior guard Sam Sheridan said they’d been trying to emphasize to the team to not be on their heels and be on their toes.

“Let’s not be falling away,” he said. “Let’s attack and not settle for jump shots and as a result we liked what we did in the first half.”

A George three had the Lakers within one at the 5:40 mark, but two Bronco three-point-plays gave Coopersville a 21-12 halftime lead.

Sheridan scored a quick five points to inch the Lakers within seven to start the third, but three consecutive trey balls by Coopersville extended their lead to 35-18 halfway through the quarter. Sheridan kept the Lakers afloat with nine total points in the third, but the Broncos still led 46-29 going into the fourth.

Core hopes that Sheridan, an all-conference player and three-year starter, received a boost from his 11-point performance.

“First of all, Coopersville is a great team,” Sheridan said. “We knew that coming in but finding the middle of the zone was our plan, we just weren’t executing. We weren’t hitting our shots, but we were proud of our first half performance, we just kind of struggled a bit at the end of the game.”

George switched into the middle and found success flashing in the second half, along with Callum Saxe and Porter Saunders as well. Core thought his did a great job at getting open, they just struggled to put the ball in the basket.

“Tonight, we handled the press,” Core said. “But we’re just having trouble scoring. We’re just going to have to keep working. The game kind of got away from us at the end but I felt we competed better than the score indicated.”

The Broncos’ hot shooting from deep opened up driving opportunities and they took full advantage, racking up 16 paint points and 24 total points in the fourth quarter to seal the victory.

Despite the second half outburst from Coopersville, Spring Lake continued to display their business-like demeanor throughout the entirety of the game. Little remembered Core’s message before tip-off.

“He called it just acting professional,” Little said. “It’s just not getting too high or too low and if we can keep doing that, it’ll be a good mentality for the team.”

Core’s old school approach comes with a balance. He intends to have his players have some more emotion but will keep true to his tradition in his 34th year in the Spring Lake district.

Saunders scored 11 points for the Lakers and George added 10.

Spring Lake (2-6) will have a quick turnaround as they host Holland Christian (4-5) tomorrow night at 7 p.m.