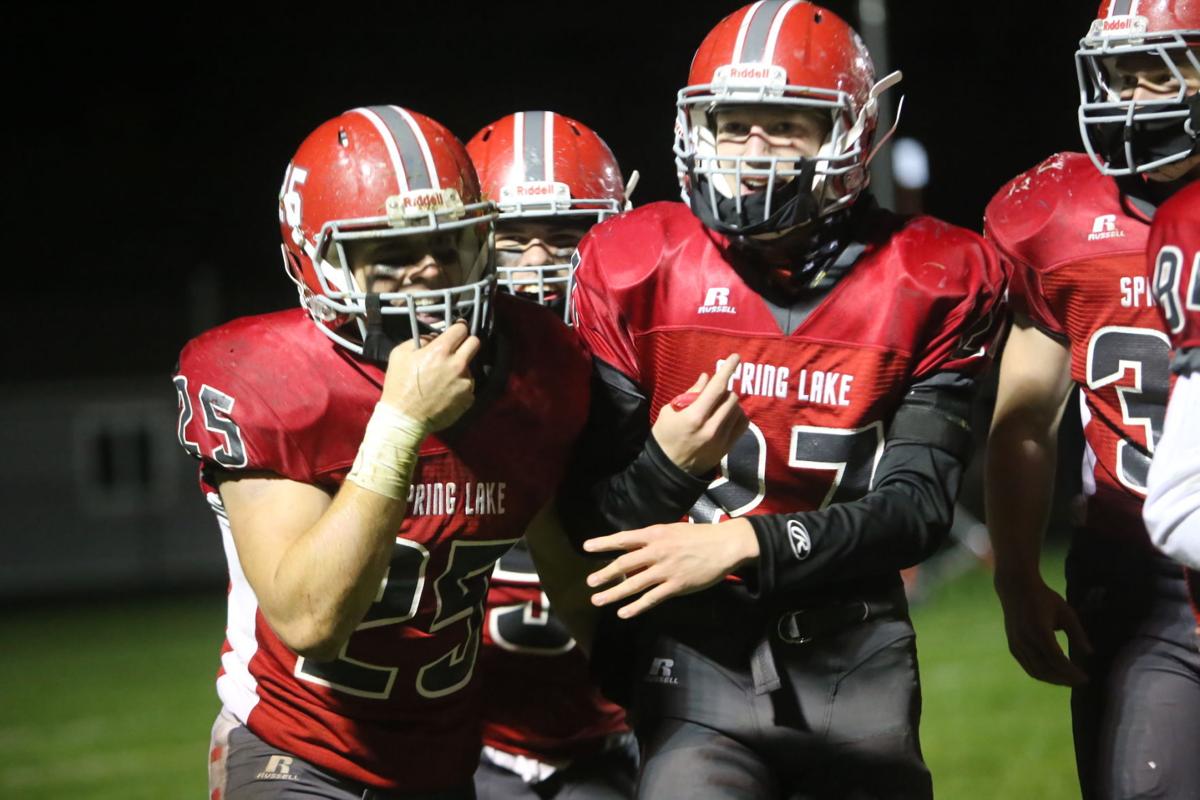 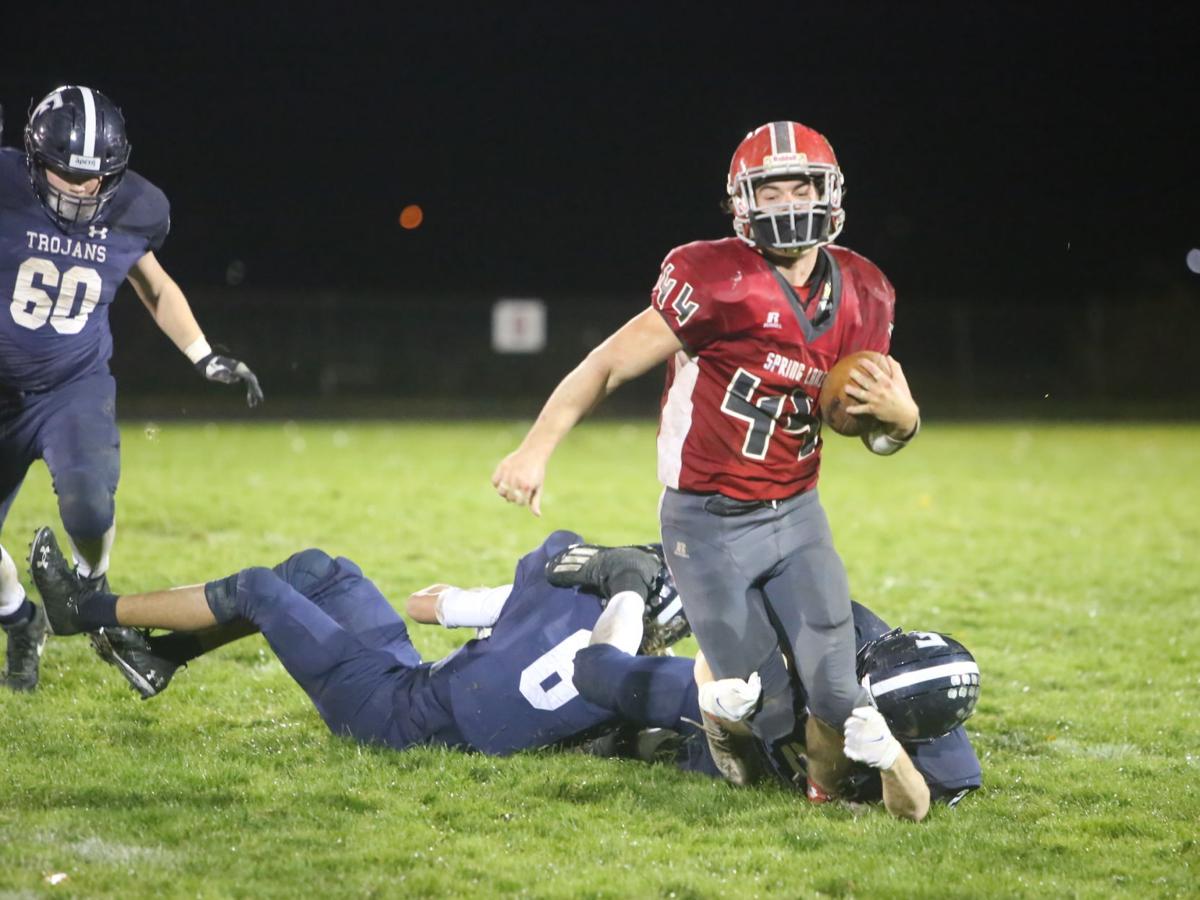 Laker senior Steve Ready (44) fights for yards during the second half of Friday’s game against Fruitport.

Laker senior Steve Ready (44) fights for yards during the second half of Friday’s game against Fruitport.

SPRING LAKE — Everyone wanted a piece of Steve Ready on Friday night.

Teammates and parents kept calling out his name for pictures following Spring Lake’s 55-24 home win over Fruitport, one that secured the top seed in their Division 4 district.

Throughout 2020, opponents have wanted to get their hands on Ready too – and in some cases, they end up regretting that. The senior’s physical running style has led to big performances to close the regular season – 71 yards on 25 carries against Fruitport, three touchdowns against Holland Christian and a massive 337-yard night against Allendale in the Lakers’ biggest game of the season.

The senior wasn’t in the end zone against the Trojans, but picking up first downs and moving the offense was the key on a wet Grabinski Field.

“It was difficult,” Ready said. “But we figured it out, got to go and we went from there.”

Fruitport opened the scoring on a Cody Nash 26-yard touchdown from Gavin Reames, but Spring Lake responded with an Andy Lee 5-yard rushing TD before Mitchell scored from a yard out.

The teams traded possessions in the second quarter before Mitchell ran in untouched with 1:24 left in the first half. Fruitport gave themselves a chance heading into the break with a late Reames touchdown with four seconds left, making the halftime score 20-14 Spring Lake.

A major turning point came on the second-half kickoff, as a Fruitport fumble would turn into Mitchell finding Derrick Paggeot for a 24-yard touchdown and a 17-yard touchdown on their next possession.

After Sam Sheridan returned a fumble for a touchdown on the following kickoff, Spring Lake’s lead was up to 34 and the game was as good as sealed. Christian Folkert and Mitchell added late touchdowns for the Lakers, while Andrew Fielstra’s 2-yard rushing touchdown was little more than a consolation.

Mitchell’s five total touchdowns were a chance to see Spring Lake’s offense at its best, getting the speedy senior quarterback in space and letting him make plays.

“This is the most together team I’ve ever played with,” Mitchell said. “It’s so fun to be around, it’s a special group.”

Mitchell and Ready are two of just six seniors on the Lakers’ 2020 roster. With a crowded backfield, Sheridan’s role is bigger on the defensive side of the ball, but the small group has been part of a two or three-year span that has seen the Lakers go from winless in 2017 to two straight playoff berths and now, a real shot at a district title.

“It’s a tribute to them,” Start said. “They stayed the course and now they get to reap the benefits. It’s how life works, you stay the course and work hard, and good things happen.”

Start’s tradition of having the seniors take a lap of the field after their senior night game can be an emotional one. Last year, there was more uncertainty about Spring Lake’s postseason status, making it even tougher. This year, rivalry paddle in hand, it was a chance for Ready and his teammates to celebrate.

“The ends of season are emotional,” Ready said. “You put in all that work into playing, and when it comes to an end it’s emotional. But we know we’re still going, and we’re gonna keep rolling as long as we can.

Now, there’s a chance for cautious optimism. Pre-pandemic, the Lakers were scheduled to play their postseason in Division 3, where they would have been the smallest school in that grouping. Instead, they’ve got the top seed in their district of Division 4, and while state final talk is a long ways away, there is the chance for a first playoff win since 2001.

“It’s a very talented group of dudes,” Ready said. “We’re just going to go out next week and play our hearts out.”

On Sunday afternoon, the MHSAA announced the state’s football playoff pairings for a unique state tournament.

With all the state’s schools eligible to compete, all four local schools will be involved in the first round of playoffs, where teams will play three games to determine a district champion.

After their 27-14 loss to Coldwater on Saturday, Grand Haven finished as the seventh seed in their Division 1 district – they’ll travel back to where they started the season, playing at Grandville at 7 p.m. Friday.

Spring Lake (4-2) finished as the top seed in their Division 4 district – they’ll host Fremont on Friday at 7 p.m. The Packers went 2-4 in the regular season.

Fruitport is also in Spring Lake’s district, and the 2-4 Trojans will travel to the No. 3 seed Whitehall, who went 5-1. Their game will start at 6 p.m. on Friday.

Muskegon Catholic Central completed their undefeated season with a 60-0 win against Holton on Friday night. Their district may be one of the toughest, with undefeated teams Montague and Clare on the other side of the bracket. MCC will host Shelby at 7 p.m. Friday.

You can email Kyle at kturk@grandhaventribune.com or find him on Twitter @KyleTurkGHT.