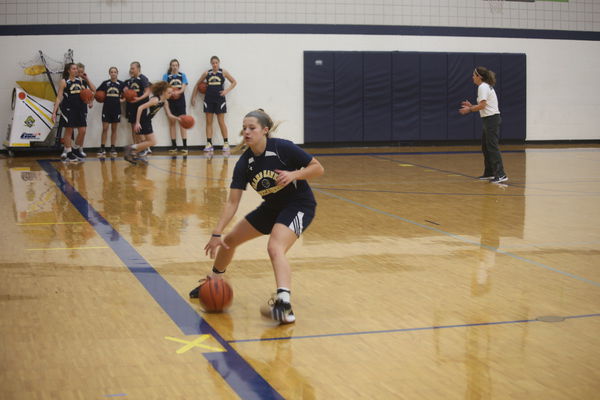 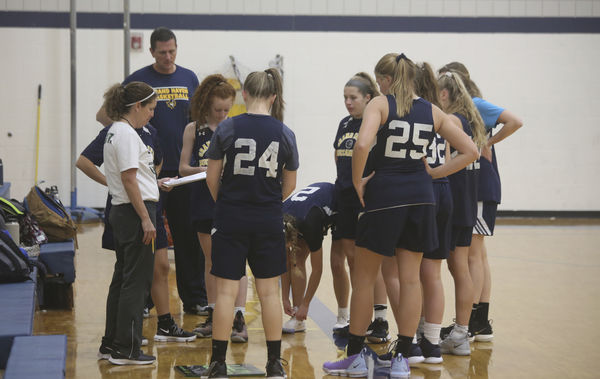 This week marks the beginning of the winter sports season. We will head to Spring Lake, Fruitport and Western Michigan Christian later this week to cover the first week of girls basketball practices.

GRAND HAVEN TWP. — The Grand Haven girls basketball team had their strong regular season ended earlier than expected after a 17-3 regular season for the 2018-19 season. The Bucs drew Muskegon—a team that went on to lose in the state semifinals—in the first round of districts and lost a close game 52-47.

Grand Haven graduated seven players from last year’s roster and this year will rely on an influx of youth to bolster the rotation.

“It’s kind of a reloading year. I love my team and am super excited about the season,” Grand Haven head coach Katie Kowalczyk-Fulmer said. “We won’t be picked to win the O-K Red, there’s teams that have more experience. It’s just kind of nice to get things going, it’s a fun time of year.”

This season, Grand Haven will likely be considered a middle of the pack O-K Red team this season. Hudsonville and Rockford will be the two top teams in the conference, as both are returning deep, experienced rosters. East Kentwood will also be a competitive team featuring the tallest team in the conference. The Bucs face a strong conference, but look to carry on the strong legacy of the program.

Here are three questions facing the Buccaneers girls basketball heading into the season:

Who will your impact players be?

Kowalczyk-Fulmer: “Jolee Houle, she is our only returning starter. She is a senior and she just committed to Wayne State to play division two. She’s a kid that has put a ton of time into her game, as a four year varsity player she will be an impact player. Mackenzie Gross is a player who played a lot of minutes for us last year. She’s 6-foot-1, a good athlete and probably our best rebounder. She’s very physical and strong down low.”

What skills or values are you instilling in your team during this first week of practice?

Kowalczyk-Fulmer: “Yesterday, we talked about working hard, having fun, being a good teammate and practicing and playing with purpose everyday. What I like about this team is we have a lot of size. We have skilled players around the rim and we have kids who can shoot the three. Houle is one of the best shooters in the state. We don’t want to live and die by three point line, so you’ve got to have that inside-outside balance. When talking about this year, we think we have a great inside presence.”

What is the biggest question facing your team this season?

Kowalczyk-Fulmer: “We have a lot of first year varsity players, we’ve returned five players. We have four sophomores on the varsity team and that’s a fairly young team, which isn’t super common. I don’t know if it’s a challenge, but the kids have to grow up really quick. We just have to be strong and be strong with the ball. We have a competitive schedule and face a tough O-K Red, but everyday when we take the floor here we are trying to find a way to get better.”

The Buccaneers open up their season on Dec. 6 at home against Traverse City Central. After that, the Bucs play Spring Lake at home on Dec. 20 in their last game before winter break.

Bring on the season, can't wait to watch the girls develop as the season goes on. Good luck girls!!