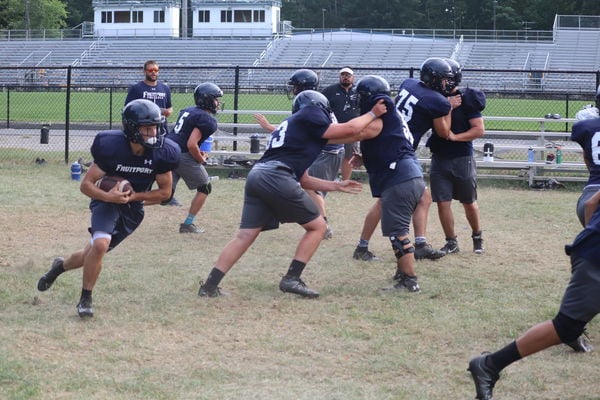 Tribune photo/D’Angelo StarksFruitport runs through a play during fall practice on Wednesday, August 14. 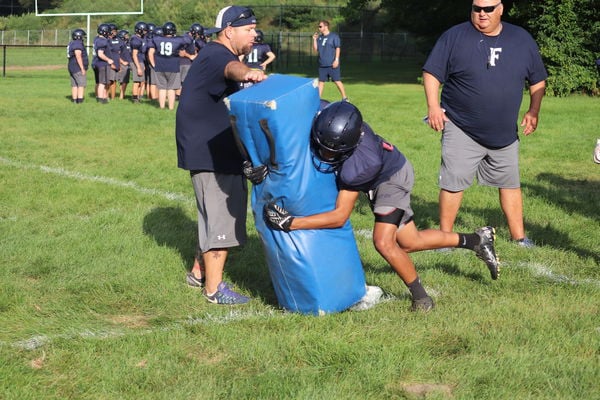 Tribune photo/D’Angelo StarksFruitport runs through a play during fall practice on Wednesday, August 14.

This week marks the beginning of the fall sports season. We’ll head to Muskegon Catholic Central later this week to cover the first week of football practices.

FRUITPORT – Nate Smith heads into his second season at the helm of the Fruitport football program. The team finished 1-8 last season in Smith’s first season, and the Trojans are looking to bounce back in a big way this year.

Tyler Zimmerman was poised to take over the starting quarterback role as a sophomore last season until he broke his thumb.

“He’s been doing great for us all summer. Leading everybody in the weight room and on the field he’s been a real leader. So, we’re expecting a lot from him,” Smith said.

The team also features returning playmakers on the defensive side of the ball. David Ross is a returning senior who was an all-conference linebacker for the Trojans last season.

“He’s going to solidify the middle for us. He’s the extra coach on the field. He does a lot of film study, he’s a tremendous football player,” Smith said.

Smith is hoping that the return of his quarterback as well as an abundance of experience can lead to a bounce-back season in 2019. Here are three questions Smith answered about his teams upcoming season.

Who are your impact players for this year's team?

“Ethan Flores is a three-year returning starter for us, he’ll be starting on both sides of the ball for us. He’s a receiver and he plays running back. We’ll be moving him all over the place on offense.

“Crue Cooper is another senior, three-year starter. He’ll be playing some defensive end and will also be playing all over the place for us offensively. He will play some H-back, tight end and slot receiver.

What mindset or values are you trying to instill in the team during the first week of practice?

“We have three pillars that we talk about,” Smith said.

Pillar two: “Win from within. For this we talk about different values like integrity, intensity, increased intentionality and investment. We talk about winning and how it starts with us.

Pillar three: "We say fight on quite a bit. We use that in terms of never quit, never arrive. We’re going to be resilient, we’re going to be perseverant and even in victory we are not going to dwell on things too long,” Smith said.

What is the key game on your schedule? Why?

“For us, it is that week one. Last year was my first year here and last year was about reestablishing what we were going to be about and re-establishing Fruitport football.

“Last year was our first proof that we put on paper. So, for us, we’ve talked a lot about that first game and being able to look back and say ‘okay, it’s been an entire year now. How do we look?’

Fruitport kicks off their season on Aug. 29 at home against Forest Hills Eastern.